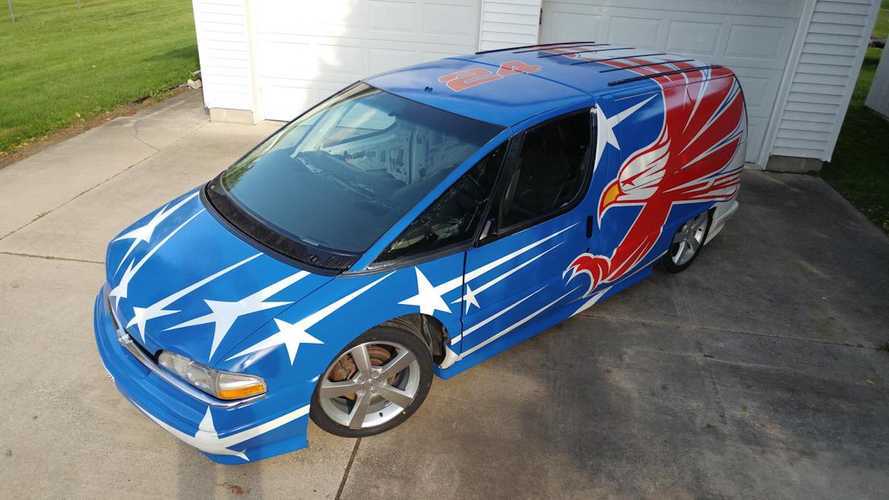 And it can be yours for only two grand.

Minivans are often regarded as soccer mom vehicles, mainly because of their common usage to ferry kids to and from football practices. Modern minivans, however, have become more athletic, in a sense that they offer more grunt that they usually do.

But before the existence of powerful minivans, Grassroots Motorsports forum user ShawneeCreek took up a challenge to transform an MPV into a racing machine. The result? This – the 1996 Chevy Lumina APV.R that screams 'Murica!

Now, apart from the patriotic graphics done, what's special about this build? As the headline suggests, this Chevrolet MPV sits atop another General Motors brand, a seventh-generation Pontiac Grand Prix, specifically a 2006 G6 GTP. The body, as mentioned, was from a 1996 Chevrolet Lumina APV.

Moreover, this Frankenstein build he's racing spec inside as well, which means the headliners were removed and most of the rear interior taken out to save weight. Power comes from a 3900 V6 engine that makes 240 horsepower (179 kilowatts) and 240 pound-feet (325 Newton-meters) of torque. And yes, it comes with a GM F40 6-speed manual transmission.

Interesting Builds Waiting For A Buyer:

This whole build is for sale for only $2,000. It's cheap, but the seller was totally honest about some issues of the car. It's noisy and drafty, plus it idles at 2,000 rpm, which, according to the seller, might be because of the cold air intake installed.

He also added that engine maintenance won't be easy because of the nature of his build. In any case, the seller is open to selling the unit by part.