It's an homage to a classic Bronco that conquered Baja twice, but this one will be road-ready.

It's been less than 24 hours since the Ford Bronco reveal took place. Imagine our surprise, then, when we saw the above photo appear earlier today on the Facebook page of noted Ford Mustang tuner Saleen. It's the new Bronco, but the livery pays homage to an old and rather famous Bronco known as Big Oly. And apparently, you'll eventually be able to buy one.

Little is known about this new offering from Saleen. The tuner's website has a page dedicated to the Bronco, which lists a wide range of aesthetic changes the Saleen version will undergo. Most of the body panels will be swapped out for Saleen components, including the fenders and quarter panels. A new front bumper with integrated lights and a skid plate will be included. Additional lights, a big rear wing, and an external spare tire carrier are also listed among Saleen's upgrades. Beyond that, the website says numerous performance features will be plugged in, but no details are offered.

As for the wonky livery, it's one that will be familiar to old-school Baja fans. A Bronco-themed Baja race truck called Big Oly won the event back-to-back in the 1970s in the hands of legendary driver Parnelli Jones. It's not a feat easily accomplished, and as such, Big Oly's iconic livery became famous in the off-road community.

Since this project arrived so quickly after the Bronco's debut, we can only assume this is something Saleen has been working on for a while. The tuning company has several projects cooking right now, not the least of which being a new concept race car called the GT4, based on the company's S1 road car. It debuted in October 2019, but with the S1 still not available for purchase, it's unclear when the GT4 will be offered to buyers.

Get To Know The New Bronco: 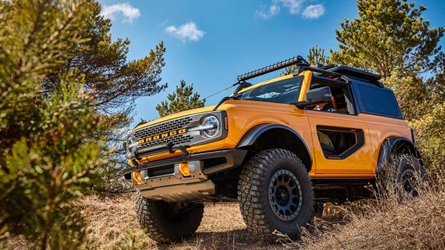 2021 Ford Bronco Lineup Shows Its Adventurous Side In Lifestyle Videos
⠀

The company rose to prominence tuning Ford products, however, so seeing a tweaked Bronco sooner rather than later seems likely. There's some good raw material to work with, as the reborn SUV already comes with impressive off-road features straight from the factory. A pair of boosted engines are available, including Ford's 2.3-liter four-pot and the twin-turbocharged 2.7-liter V6. With 310 horsepower and 400 pound-feet of torque, we suspect the V6 is ripe for making more power in Saleen's hands.

53 Photos
By: Christopher Smith
++
Got a tip for us? Email: tips@motor1.com