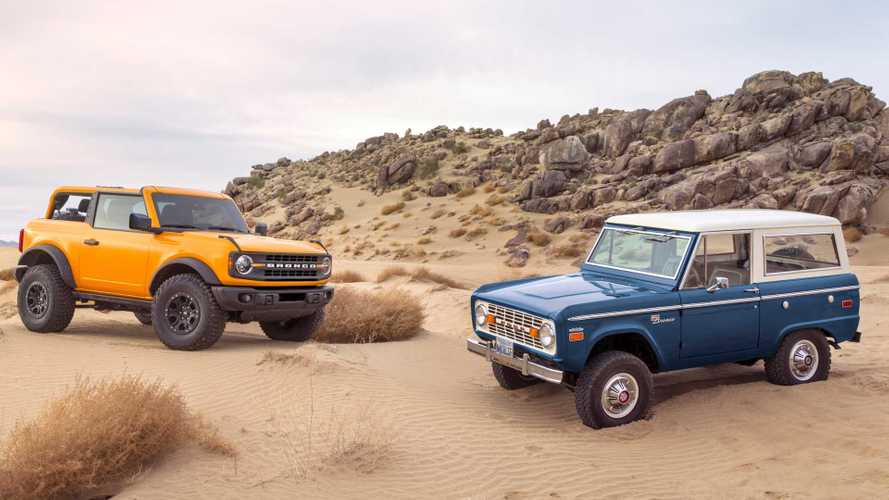 The 2021 Ford Bronco is a retro-flavored (yet thoroughly modern) off-road SUV.

The 2021 Ford Bronco, revealed via livestream, is the first off-road SUV in decades to properly challenge the open-air Jeep Wrangler. With a removable roof and doors, an outrageous crawl ratio of 94.8:1, and an available seven-speed manual transmission (with a way-down-low granny gear), the Bronco sounds like it's going to be a lot of fun to drive down either a rock-strewn trail or a beachside highway.

It also looks very impressive cosmetically, with retro-inspired exterior styling and a rugged, modern interior that incorporates the latest Ford technology. And like FCA and its Jeep Wrangler, the Bronco trades hard on its heritage as a rugged, fun-loving off-roader with a few Easter eggs scattered throughout the vehicle.

See our article for full details on the new 2021 Ford Bronco.

The 2021 Ford Bronco’s greatest link with its past is clearly its exterior styling. From forward tie-down cleats that ape the original’s peaked fenders to a functionally short rear overhang, the Bronco’s stance, stature, and styling might as well have been cribbed right from 1966. Available 35-inch tires with beadlock-capable wheels, however, are pure 21st-century off-road technology. And of course, there’s a more versatile four-door model in addition to the two-door, offering family-oriented Bronco owners the space they’d need for their adventures. Regardless, both Bronco variants offer a removable roof and doors for top-down fun.

At first glance, the slab-sided interior (which we cover in detail here) appears to be a bit plain and uninspiring – the dashboard monolith facing the passenger, for example. But delving deeper reveals several thoughtful touches that both improve versatility and link the 2021 Ford Bronco to its heritage. Bold colors (who knew saddle tan upholstery could pair so well with orange accents?) liven up the styling quite a bit, as does an available 12.0-inch infotainment display cleanly integrated into the dash, recalling the 2021 F-150 slightly.

Many interior features (the driver and passenger assist handles, the center console grab handle, and a center console plate, for example) are secured via BRONCO-engraved hex bolts, signifying they can be removed and replaced with dedicated accessories. Another pleasant feature is a rail system on top of the dash, which makes for a secure place to mount an action camera, trail navigation system, or cell phone – with easy access to the USB port found at the base of the windshield.

The standard infotainment system on the 2021 Ford Bronco is an 8.0-inch touchscreen display running Ford’s latest Sync 4 connectivity suite. Optional is a 12.0-inch display that fills the center stack quite nicely, and mercifully, Ford includes lots of hard buttons regardless of the screen size. Included with the larger display is a 360-degree camera system, making parking maneuvers and trail driving easier and less stressful. Other available features include a Bronco-optimized version of the FordPass Performance app, adding off-road navigation and sharing features for group excursions. Reconfigurable digital instruments are also available.

The 2021 Ford Bronco also includes a number of fun styling touches that hearken back to its heritage. Among them are “trail sights” on the front fenders that double as tie-down cleats for roof-mounted cargo. The shape of these unique bits is directly inspired by the front fenders of the 1966 Bronco. Other funky Easter eggs include a starter button that recalls the shape of the headlights, a fold-out cargo table that looks for all the world like an original Bronco’s tailgate, and taillights that look like stylized Bs.