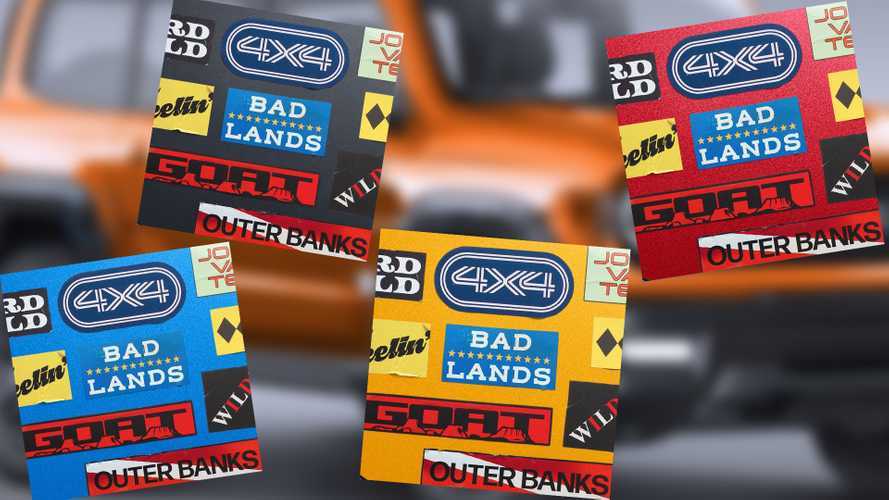 Seven drive modes are also confirmed for the reborn off-roader.

The Ford Bronco teaser train is in high-speed mode ahead of the off-roader’s reveal on July 13. The official Bronco Instagram page is now filled with everything from exterior details to drive mode hints, which we’ll talk more about in a bit. First up is a clever move from Ford to reveal the Bronco’s colors – visually speaking, anyway.

Ford’s modus operandi as-of late involves dropping several photos on Instagram that, when viewed as a whole, create a larger image. Yesterday the automaker posted a mosaic showing a range of bumper stickers on a nondescript light blue background. Nothing seemed to stand out, but this time Ford hid its teaser on a specific post with several photos on the square. Well played, team Bronco.

None of the colors are mentioned by name, and we don’t know if these are all the shades Ford will offer. However, some match up to colors from an alleged leak we covered in March. Cyber Orange Pearl, Lucid Red Pearl, and Race Red are pretty obvious, and it’s possible the light blue background featured on all posts is really Iconic Silver Metallic. The dark gray slide should be Carbonized Gray Metallic, and Oxford White is a given. The remaining two shades of blue, however, don’t match up with any of the leaked shades. In other words, there’s still some colorful mystery awaiting us at the big reveal.

Get Ready For The Bronco:

Speaking of mystery, the latest Bronco teaser posted today talks briefly about the SUV's various drive modes. Another carousel of images in a single post shows a Bronco badge in mud, sand, and dirt, which Ford mentions are three of seven different available drive modes.

What are the other modes? We can only speculate right now, but GOAT mode was recently confirmed by Ford Global Director of Icons Dave Pericak. The original Bronco carried that acronym, which stood for Goes Over Any Terrain. With a slathering of possible drive modes uncovered in a Ford patent application for an active suspension system, it’s hard to pinpoint exactly what those final four could be.

Fortunately, we won’t have long to wait. The new Bronco will finally be unveiled on July 13, and you can see it happen live right here at Motor1.com.