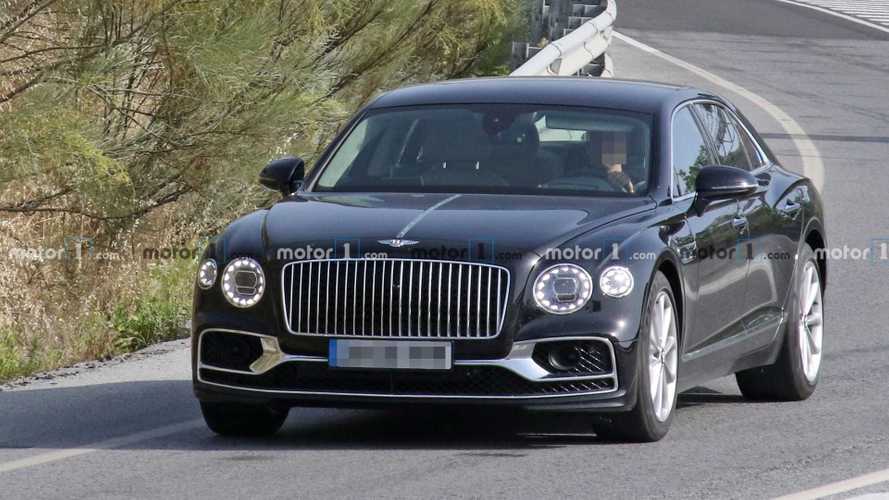 With the demise of the Mulsanne, Bentley has promoted the Flying Spur to flagship status. It’s easily the most luxurious sedan on sale today, outside of the Rolls-Royce Phantom. It also happens to have a remarkable top speed of 207 mph (333 km/h), so it’s certainly not lacking in the velocity department despite weighing just about as much as the moon.

Bentley is well aware people shopping in the high-end market are always looking for something better and are willing to pay the premium, which is why the Flying Spur could get the Speed treatment. This prototype could be an early sign of the go-faster version, as denoted by the quad tips we’ve also seen on the Bentayga Speed fitted with the Akrapovic exhaust.

The Regular Flying Spur Is No Slouch:

The difference between this stately sedan and Crewe’s opulent 190-mph SUV is the Flying Spur prototype appears to be of the PHEV variety. There’s a fuel cap on the driver’s side rear fender, and we know for a fact it’s not the one through which the owner feeds the W12 because the gasoline fuel cap is on the other side.

If we’re indeed looking at the Flying Spur Speed, it would make sense for Bentley to adapt the plug-in hybrid powertrain from the Porsche Panamera Turbo S E-Hybrid. Stuttgart’s electrified sports sedan and wagon combine a twin-turbo 4.0-liter V8 with an electric motor for a grand total of 671 horsepower and 627 pound-feet (850 Newton-meters) of torque. That would represent a healthy bump in horsepower over the W12’s 626 hp, but the 6.0-liter pushes out more torque, at a mountain-shaking 664 lb-ft (900 Nm).

That said, we’re not entirely convinced this is the Speed-spec Flying Spur since quad exhausts are available on “lesser” models, namely the Continental GT fitted with the V8. We could be looking at a regular plug-in hybrid Flying Spur, which would probably have the twin-turbo 2.9-liter V6 and electric motor from the Panamera E-Hybrid. In this case, the combined output stands at 456 hp and 516 lb-ft (700 Nm) in the Porsche.

Whatever this is, you can rest assured Bentley has plans to diversify the Flying Spur lineup. Now that the model is the new crown jewel of the range, it means there’s no risk of stepping on the Mulsanne’s toes anymore.