2021 Audi RS3 Sportback: This Is What It Could Look Like

With the 416-horsepower A45 S, Mercedes and AMG have demonstrated the horsepower wars are far from being over. Of course, there’s more to a successful hot hatch recipe than stuffing copious amounts of power under the hood, which is why the three-pointed star has given its feisty compact car an ace up its sleeve – a drift mode. While we don’t know whether Audi is planning something similar for its Quattro to make it tail-happy, various reports are indicating the inline-five is getting slightly more power.

We’ve now rendered the next-generation RS3 in Sportback flavor using as a foundation the plethora of spy shots we have in our database. From the giant air intakes up front to the chunky brakes on the side, it’s easy to figure out we’re dealing with a model a couple of steps above a base A3. The intermediate S3 will be out soon with a little over 300 horsepower, while the full-fat RS3 is going to have an output starting with “4.”

Latest intel suggests it could have as much as 415 hp from the award-winning 2.5-liter TFSI, with German media reporting an RS3 Performance might pack close to 450 hp. That would allow Audi to reclaim the power crown it lost to the boys and girls in Affalterbach, but it remains to be seen whether any of these rumors will come true.

The previous-generation RS3 had a rough life in Europe due to the more stringent emissions regulations, forcing Audi Sport to temporarily withdraw the model from the Old Continent. The Four Rings eventually figured out a way to make the turbocharged five-cylinder engine comply with WLTP, and have installed the powertrain in the new RS Q3 and RS Q3 Sportback since then.

Audi Sport’s Sales and Marketing chief, Frank Michl, told Auto Express we’ll have to wait “some months” to see the RS3 break cover, without revealing whether the sedan will be shown alongside the hatch. The first order of business is to unveil the S3, which was spotted recently with zero camouflage, thus hinting at an imminent reveal.

Once again, the Sportback will remain a forbidden fruit in the United States where only the sedan will be available in base, S, and RS specifications. The previous iteration of the five-door hatch was offered for a while in North America as the E-Tron plug-in hybrid, but it's too soon to say whether it's coming back for the new generation. 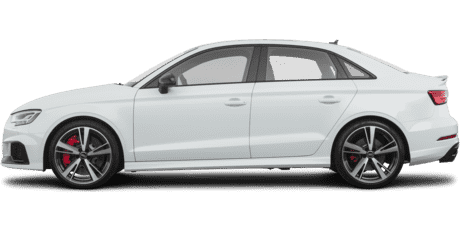