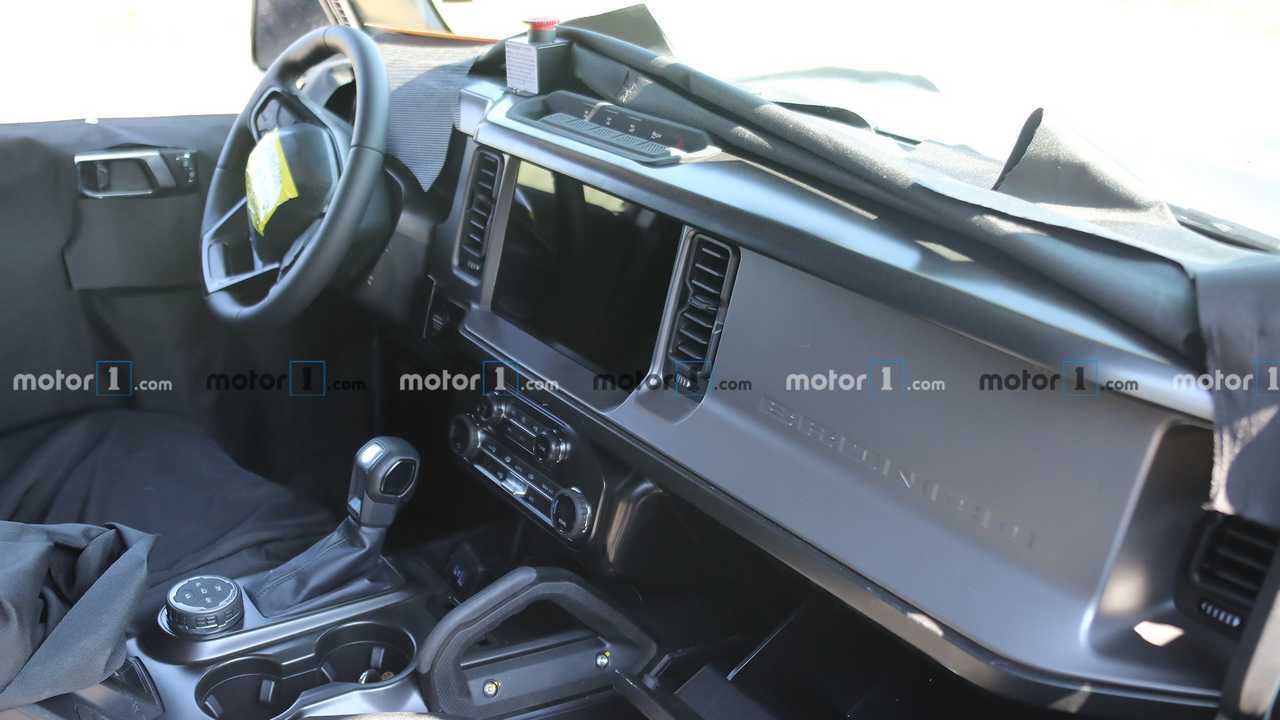 It's a clean look for the reborn SUV.

We are literally just days away from finally seeing the reborn Ford Bronco. That hasn’t stopped spy teams from trying to catch a preview of the Wrangler fighter, and today that persistence paid off. We’ve seen plenty of spy shots and leaked photos of the outside, but now we have a clear look at the Bronco’s interior.

The camera caught a good portion of the dash uncovered, revealing a rather clean look. There are some similarities to the new F-150, particularly with the lower stack of buttons and dials for basic operation of the stereo and climate control. You also won't find a push-button or dial selector for the transmission, as a shifter stalk rises prominently from the console.

Ford Previews All Three Versions Of The New Bronco, Remembers Its Past
⠀

Right behind the stalk is the manual selector for the four-wheel-drive system. It seems Ford is very keen to offer an old-school experience for the driver, which isn't a bad thing in this genre. That said, the instrument cluster is still covered so we can't tell if there are analog gauges or a digital screen behind the wheel.

Speaking of screens, there's obviously a large touchscreen integrated into the dash where we suspect many of the Bronco's more intricate functions will be located. Among other things, the Bronco could get a plethora of bizarre drive modes that could even make the off-roader "dance" in certain situations.

This relates to a range of adjustable suspension settings with legitimate off-road functionality. Quicker oscillations at the front and rear wheels can help dislodge a vehicle stuck in certain situations like mud. The system could also have a Daredevil Mode, which is something we know nothing about but it might explain the massive grab handle attached to the console.

Thanks to recent Ford teasers, we already know the Bronco will have a removable roof and doors. Power could come from either the 2.3-liter turbocharged four-cylinder from the Ranger, or any of the Blue Oval's small V6 engines. The 2.7-liter EcoBoost or the 3.3-liter V6 are possible candidates in that regard, but we don't expect to see the 3.5-liter EcoBoost offered.

We will find out the truth very soon, as the 2021 Bronco will debut in a special livestream event on July 13. You can watch it happen live right here at Motor1.com.