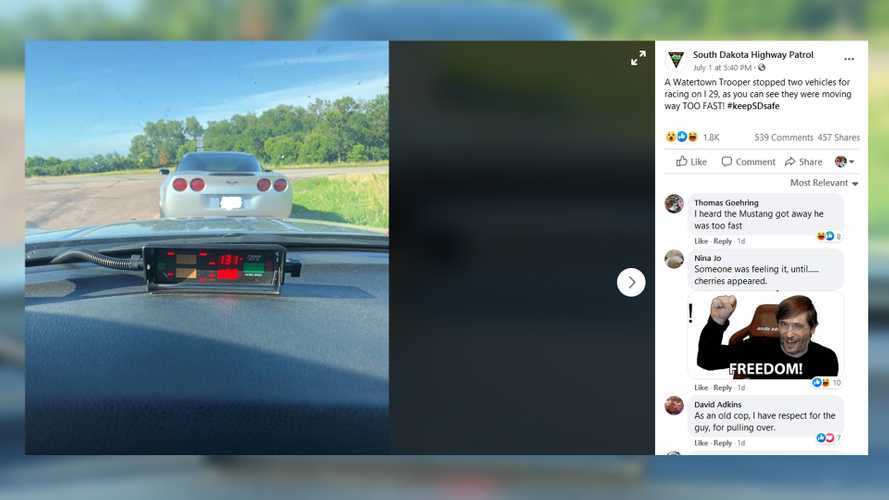 Someone's July 4th holiday is off to a bad start.

South Dakota is a land with wide-open spaces and generous speed limits. Only two major interstates are located there – I-90 which spans the entire state east-to-west, and I-29 that runs north-to-south. You’ll find I-29 on the state’s far eastern border with Minnesota, and traveling north the highway is as straight and flat as it is desolate. That combination proved too much to resist for this Chevrolet Corvette driver.

The South Dakota Highway Patrol shared an image from a Watertown-based patrol vehicle on July 1, stopped with a silver C6 Corvette. Watertown is located in the northeast portion of the state off I-29, which is where this minor speed event took place. The photo clearly shows a radar-indicated speed of 131 mph; in this particular location, the speed limit on I-29 is 80 mph so the ‘Vette was going 51 mph over the posted rate. That sounds like an expensive ticket.

You Play, You Pay:

Speeding Driver Was Running Away From Coronavirus

It could be really expensive, however. The post says two cars were stopped for racing, so now we could be talking about reckless driving or even worse charges. Racing on public roads can easily mean suspended licenses, impounded cars, and even jail time for the drivers. We have no idea what ultimately happened in this situation, but at the very least we suspect these drivers are lighter in the wallet.

If there’s any good side here, it’s that this took place on an open, flat, and very straight stretch of highway. It’s not necessarily empty, however – the intersection of I-29 and SD 81 (as seen in the photo) is just north of Watertown, which has a population of over 22,000 people. Street racing is never a good idea, but that holds especially true near larger towns and cities. And since this photo was taken during daylight hours, this obviously wasn’t a late-night callout on a deserted highway.

Should've Had A Smart Car:

Many highways in the United States are seeing reduced traffic due to coronavirus, and the temptation to lay into the throttle is certainly strong. We hope cooler heads prevail in those situations, especially as America heads into a long holiday weekend. Stay safe out there everyone.