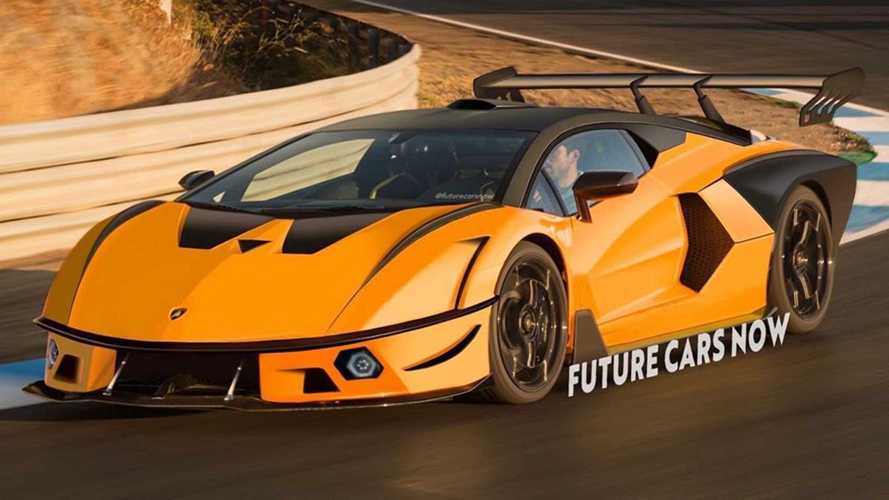 Lambo's funky body wrap has been replaced by a splash of color.

When Lamborghini previewed its track-only machine a couple of weeks ago, it hid the SCV12’s finer details by covering the body under a funky wrap featuring “Attention: Fast Car” graphics in Italian. Fast forward to the present day, the makeup is coming off courtesy of Instagram user futurecarsnow as he sent us the adjacent colorful renderings.

Without having to comply with any restrictions applicable to a road car, Lamborghini Squadra Corse went all out for absolute track performance. The wild aero makes the Superveloce Jota seem tame by comparison, making it just as extreme as the Sian FKP 37. Developed and built by Sant’Agata Bolognese’s racing division, the SCV12 looks absolutely bonkers in the adjacent digital exercise ahead of an official reveal later this summer.

Experience Lamborghini SCV12 While Testing In This Onboard Video

Lamborghini SCV12 Unveiled With Brand's Most Powerful V12 Engine Ever

We’re anxious to see how the real thing looks without the body wrap, riding on its magnesium wheels while hiding a newly developed carbon fiber chassis to keep the weight in check. The rear-wheel-drive track beast makes use of the raging bull’s most powerful V12 application ever, pushing out a colossal 830 hp sent to the road via a six-speed sequential gearbox.

The crazy aero we mentioned earlier will enable the Lamborghini SCV12 to generate higher downforce levels than an actual GT3 race car. It boasts a dual air intake on the front hood where a central rib reroutes the airflow to the roof scoop. This setup helps boost static air pressure in the engine’s intake manifold, consequently improving airflow through the naturally aspirated V12 to unlock more power.

From the beefy spoiler lip and canards at the front to the gargantuan wing at the back, the SCV12 is how Lamborghini Squadra Corse embraces the form follows function principle. If there’s one automaker that can get away with such a radical design, then it’s Lambo. McLaren has done something similar with the Senna GTR while Porsche launched the 911 GT2 RS (991)-based 935 revival, but we'd argue the SCV12 is the wildest of the trio.