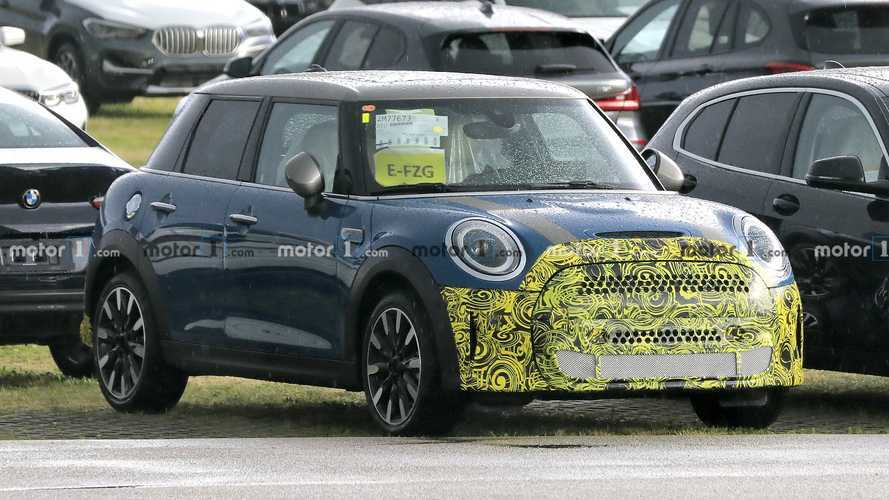 Yes, we said SE. No, it's not fully electric.

When spy photos of a new Mini come up, there’s really no way to miss that it’s a Mini. The brand’s design direction has evolved very slowly over the years, which brings us to this Cooper five-door. Like the three-door, the Mini is getting a minor nip and tuck. We think this one, however, might have something else in store. More on that in a bit.

We just caught glimpses of three-door test vehicles on June 29, though one vehicle in that fleet was a five-door. The shot was head-on, not giving a good look in profile (and no look at the rear) so this is our first real taste of the changes. Expect a tweaked front fascia with a larger grille and vertical vents at the corners, possibly housing LED driving lamps. At the rear, the familiar center-exit exhaust remains but the mesh insert moves higher on the fascia. Reflectors are relocated, and that’s about it.

Of course, these changes are specific to the Cooper S model, but is this a Cooper S? On the rear hatch we can clearly see the Cooper S badge hidden beneath black tape, but our spy sources believe something else is happening beneath the skin. Rather than boasting the 189-horsepower (141-kilowatt) turbocharged four-pot, this prototype could have the same plug-in hybrid powertrain of the slightly larger Countryman SE. As such, 220 hp (164 kW) of gasoline and electric power could be under the hood.

With this being our first sighting, we don’t have much else to go on for the likelihood of the hybrid powertrain. Offering this electrified setup in a performance package could help Mini meet strict WLTP regulation, and the five-door could offer a bit more practicality to efficiency-minded buyers. It’s also possible that the PHEV could retain a Cooper S designation as seen on the tailgate, or this could be a typical Cooper S.

In any case, it’s possible Mini could go public with its updated lineup later this year.