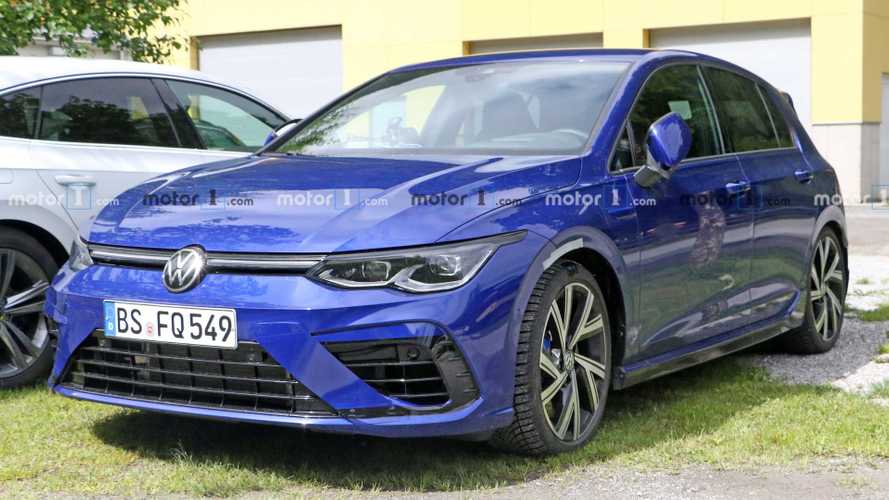 The development team barely bothers to conceal this Volkswagen Golf R. Other than a few tiny elements, there's nothing concealing the exterior. These shots also offer a look inside.

The Golf R wears an aggressive front fascia with three distinct sections and diagonal uprights separating them. The photographer is able to capture a closeup of the piece that lets us see the attempt at concealment. Don't expect the final design to be too different from what's here, but there might be a few flourishes when the camo comes off.

Get Excited For The Golf R:

The hot hatch rides on wheels with an asymmetrical spoke design. Behind them, you can see the drilled brake rotors and big, blue calipers.

There's a wing on top of the roof at the rear. Two, oval-shaped exhaust outlets emerge from each side of the back, and there's a diffuser between them.

The interior looks very similar to the top versions of the standard Golf. The seats are the biggest difference. The engineers poorly disguise the R logo on the chairs, and there are larger bolsters for gripping drivers during enthusiastic driving. Also, it looks like there is some Alcantara on the door panels.

An earlier leak indicates that the Golf R produces 329 horsepower (245 kilowatts). We are fairly certain that this output comes from a 2.0-liter turbocharged four-cylinder that runs through a dual-clutch gearbox.

VW plans to unveil the Golf R before the end of the year. Given the lack of camouflage on the cars in recent spy shots, the unveiling could be fairly soon. The company already confirms that the new R and GTI go on sale in the US for the 2022 model year.