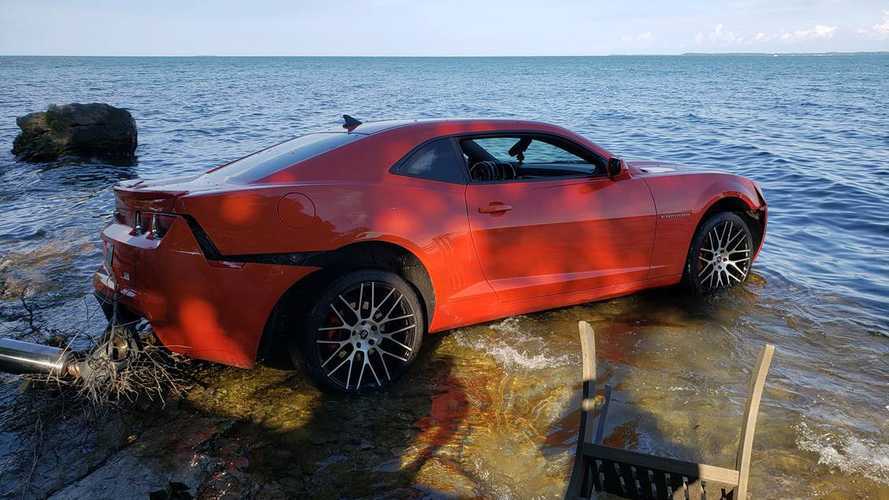 Put-in-Bay is a town in Ohio, not a directive.

Put-in-Bay, Ohio, police had an unexpected fishing trip after NFL player Jermiah Lamont Braswell drove his Chevy Camaro into Lake Erie. The incident occurred Friday, June 26, around 6:30 p.m., according to 13abc WTVG TV, when Braswell drove his orange Camaro off an embankment, and it landed on the lake’s shore below. Thankfully, no one was hurt, though photos of the accident scene taken by police show damaged outdoor furniture.

The Camaro was traveling at a high rate of speed before careening over a grassy area and landing in the lake. The car veered off the road, drove down the shoreline, and then flew into the water off South Bass Island. When police arrived, they waded into the water only to find Braswell still in the driver’s seat, attempting to drive forward.

Lamborghini Huracan Goes From New To Wrecked In 20 Minutes
⠀

Police noticed his slurred speech when they asked about how he’d ended up in the lake, though Braswell couldn’t explain how he ended up there. Instead, he told officers he was “stuck.” Photos taken by police show the Camaro sitting on the shore with the front wheels in the water. The rear bumper is partially detached, and one muffler is completely ripped from the car. It appears the airbag deployed, too.

Police arrested Braswell, an undrafted rookie with the Arizona Cardinals after a breath test revealed he exceeded Ohio’s legal Blood Alcohol Content limit. Braswell was the only passenger in the vehicle, and he’s facing an Operating a Vehicle Intoxicated (OVI) charge. While Braswell was far from his team, he graduated from Central Catholic in Toledo, Ohio.

Save Thousands On A New Chevrolet Camaro

Put-in-Bay, Ohio is a regional summer tourist destination, and it’s usually packed once the waters start to warm, so we’re glad to hear no bystanders were injured. The OVI charge Braswell faces could lead to jail time, fines, a license suspension, and other consequences if this is his first offense.