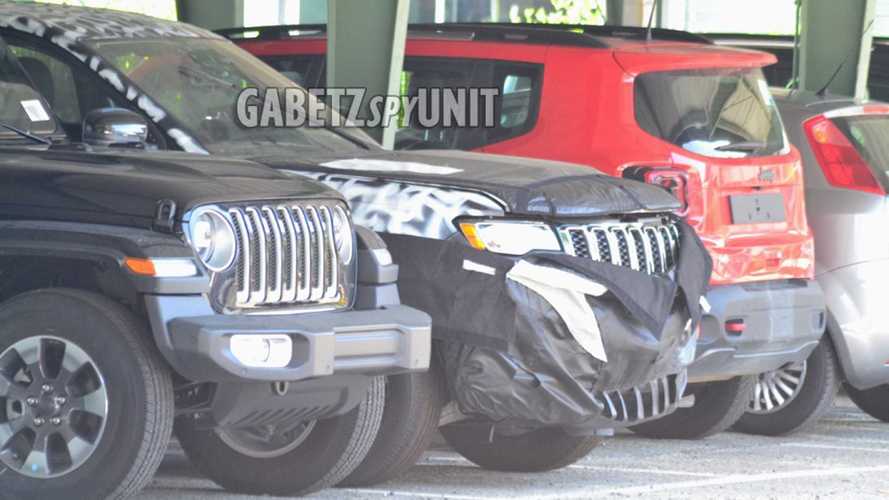 In a different reality, we would have already seen the 2021 Jeep Grand Cherokee. The rugged off-road brand was supposed to pull the cover off the updated SUV earlier this month at the Detroit Auto Show, but the coronavirus forced a three-month production delay. In the interim, we’re still looking at spy photos, though the latest finally show some of the SUV’s sheet metal for the first time.

We can see the seven-slotted grille continues, though the slats look taller and thinner than the squarer ones on the current offering. We can also see the headlights, though they look very similar to what’s on the 2020 Grand Cherokee. They feature the same shape, and both have the turn signal tucked to the outside edge. The hood is also uncovered, featuring a tall leading edge where we expect the Jeep branding to sit.

The rest of the SUV remains covered under thick black plastic and cladding, though it’s challenging to hide the longer wheelbase. When the update Grand Cherokee arrives, it rides on the Alfa Romeo Giulia platform that also underpins the Alfa Romeo Stelvio. The longer footprint will allow Jeep to shoehorn in a third row. The Jeep will arrive with several powertrain choices like a turbocharged 2.0-liter four-cylinder serving as the entry-level mill. Higher trims will get the company’s Pentastar V6 with eTorque, and the 3.0-liter V6 diesel will also be available. A plug-in hybrid variant is in the works for a later launch date.

This will be the Grand Cherokee’s most significant update since the current generation went on sale for 2011. That means there should be an extensive interior update that’ll feature all sorts of bells and whistles from FCA, like its updated Uconnect infotainment system. A plethora of standard and optional safety features should also be available. However, we won’t know all the details until Jeep reveals it, and we don’t know when that’ll be right now.