2021 Ram TRX Coming This Summer, According To Facebook Teaser 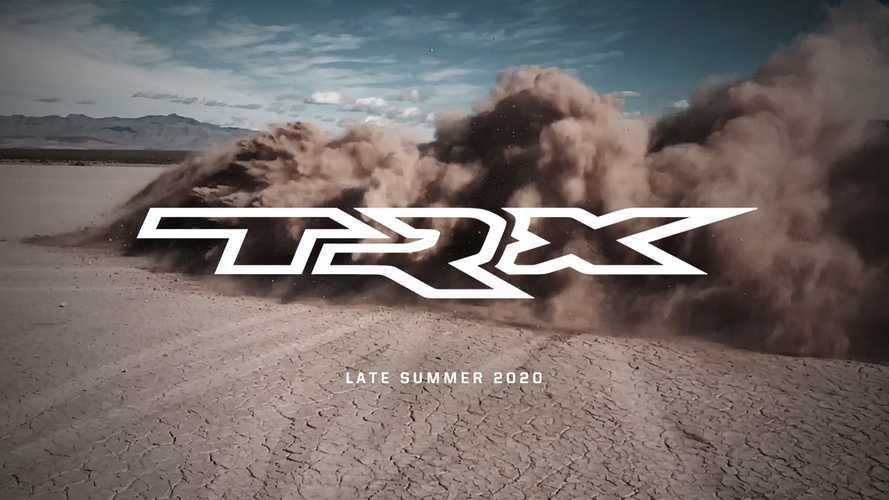 A cloud of dust and a bombastic V8 engine note are all the evidence we’ve got so far.

The 2021 Ram TRX is on its way by the end of the summer, according to a teaser video found on Ram Trucks’ Facebook page. The video, which shows nothing but a massive plume of dirt accompanied by the sound of a (hopefully) Hellcat V8, with the official TRX logo overlaying the footage. A link in the video caption takes users to a TRX microsite on Ram’s webpage, where folks can sign up for updates on the Raptor-rivaling off-road pickup.

There’s really not much analysis we can do on the teaser video. However, its soundtrack is quite tantalizing. Unlike the Ford F-150 Raptor, the TRX will offer a V8. What’s more, we’re fairly certain the V8 heard sifting through the cloud of dust is FCA’s supercharged 6.2-liter Hellcat mill.

If it were any other automaker, we’d expect the truck application of a Hellcat motor to be detuned slightly, but since it’s FCA, we’re pretty sure the TRX is going to get the same 707 horsepower and 645 pound-feet (527 kilowatts and 875 newton-meters) as the Jeep Grand Cherokee Trackhawk. And that’s assuming the Ram doesn’t get the 717 hp (535 kW) of the Challenger Hellcat or the 797 hp (594 kW) of the Challenger Hellcat Redeye, both of which are also a possibility.

Part-time, two-speed four-wheel drive will likely be standard, but given the TRX’s desert predilections, we hope that the electronic-locking rear differential can be engaged in two-wheel drive too. Also on the menu will be a widened track (recalling the 2016 Ram Rebel TRX concept), as well as adjustable suspension and steering. An eight-speed automatic will probably be the only transmission available.

We also think that the high-performance Ram, which will ditch the “Rebel” appellation and be called simply “TRX,” will offer at least one base engine. The 5.7-liter Hemi V8 is likely (with or without eTorque mild-hybrid technology), although it’s possible Ram will offer a cheaper 3.6-liter V6 in the TRX as well, mirroring the engine lineup of the less bombastic Rebel.

FCA is doubling down on desert-ready pickups, following the Jeep Gladiator Mojave with the Ram TRX. When it arrives at the end of the summer, it will finally give the Ford F-150 Raptor some real competition