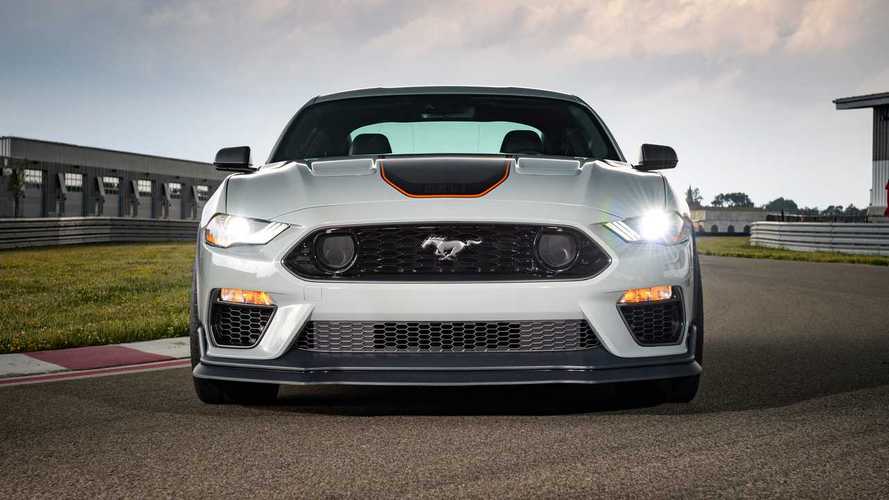 Ford has suggested they could be both.

Update: A Ford spokesperson definitively clarified that the Mach 1's round grille inserts are strictly for show.

“The round inserts on the grille flanking the Mustang logo are a solid, nonfunctional feature of the newly designed front end on the new 2021 Ford Mustang Mach 1. While the ground grille inserts can be removed by customers, they were not designed as a means for additional cooling. The new Mach 1 fully meets all of our track cooling requirements with those inserts in place. Theoretically, they could be removed and customers will get additional airflow, but at the compromise of increased front lift.”

Last week, Ford unveiled its latest special edition Mustang. The Mach 1 moniker is absolutely legendary in the world of Mustang fandom, and with 480 horsepower (358 kilowatts) on tap from its 5.0-liter V8 engine, the 2021 version is easily the most powerful Mach 1 ever. However, nosing around the Mustang community we see that not everyone is satisfied with the new look.

Two issues seem to stand out. We talked about Ford’s decision to forego the iconic Shaker hood scoop in our Mach 1 debut article, but we didn’t take a deep dive into those faux driving lamp cutouts in the grille. They are absolutely designed to tug on enthusiasts’ heartstrings, paying homage to the 1969 Mach 1 and its round lights mounted in the grille. There are no lights for new Mach 1, and actually, it was suggested to us during a special preview event that those round inlets could offer improved airflow to the engine.

So, are those faux light features merely ornamental, or do they have an actual purpose? Ford’s presentation of the Mach 1 didn’t specify anything beyond aesthetics, but it was strongly suggested that better airflow was certainly part of the design. The round cutouts are clearly solid in photos, but are they removable? The Detroit News cites Mustang Marketing Manager Jim Owens as saying he has no doubt some customers will “punch them out” for better cooling.

It’s always a bit odd when automakers talk about vehicle modifications, especially ones that involve cutting up a car. Does this mean those faux light caps were designed to be removable? If so, we can also easily see people dropping lights in there, which at least satisfies one of the aforementioned retro-themed issues. That is, unless lights would have a negative effect on airflow, which is something that Ford told us was a major reason for not going with a Shaker hood. Either way, the new Mach 1 certainly leaves room for aftermarket companies to step in and offer some nostalgic upgrades.

Either way, the new Mach 1 certainly leaves room for aftermarket companies to step in and offer some nostalgic upgrades. As for Ford’s true intention with these round grille inserts, we’ve contacted the Blue Oval for a deeper understanding of the madness behind the method here. We’ll drop an update when we get the explanation.