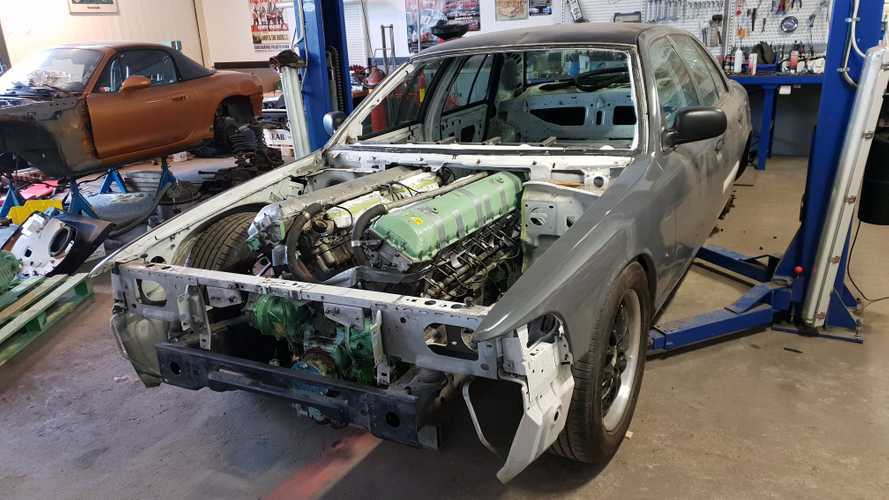 This isn’t an engine swap you see everyday.

The Ford Crown Victoria isn’t the go-to platform for tuners, but sometimes there’s no other choice. That’s the position Swedish man Daniel Werner found himself in when he needed to find something, anything, capable of handling the 27-liter V12 tank engine he bought. Well, not just anything. It had to be cheap, but also robust enough to handle the mill’s substantial size and weight, so he opted for a Crown Vic, the go-to body-on-frame choice for police in the US for decades.

But the Crown Vic, an imported 2006 Police Interceptor from California, was no match for the Rolls-Royce Meteor motor. Werner, which Road & Track interviewed, started to beef up the Vic’s suspension with Corvette C4 parts, but he had to resort to installing a Chevy C10 truck front end. The mill, which makes 2,500 horsepower (1,864 kilowatts), poses other problems, too. Fuel is fed through two injectors that can deliver 24 liters of fuel per minute, but if Werner runs the engine for too long, the V12’s coolant will boil.

Werner has no plans to race the swapped Crown Vic, dubbed the Meteor Interceptor. Instead, he plans to take it north of the 200-mile-per-hour (321 kilometer-per-hour) mark. According to Road & Track, even if he did find tires capable of harnessing the engine’s oomph for a powerful launch, the gearbox wouldn’t survive. Even with upgrades, it’s not designed to handle the V12’s 2,500 hp.

It’s an odd, one-off creation from someone looking to fulfill a singular vehicular vision. Fitting such a large, ungainly engine into something designed for the occasional high-speed pursuit seems downright bonkers. However, that doesn’t make the project any less exciting to see. The Meteor Interceptor is still far from completion, so in the meantime, you can follow along on Facebook, Instagram, and YouTube.