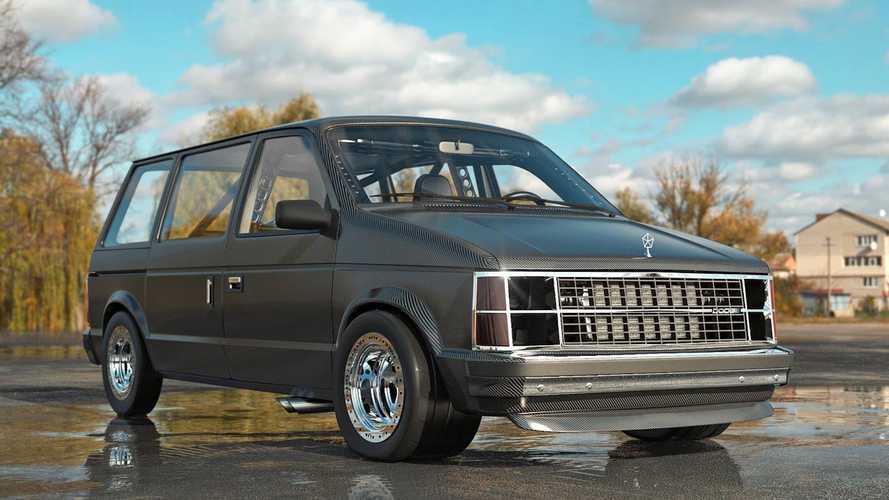 While the latest minivan offerings from Chrysler and other American manufacturers are good at carrying people, they really aren’t that quick. However, according to automotive rendering artist Abimelec Design, things used to be different. He mentions that for a brief period of time in the ’80s, Chrysler released turbocharged versions of its minivans.

Hold your horses though, as the only quoted upgrades for the sporty people carrier were a turbo and manual gearbox. That said, this rendering takes the spirit of that minivan concept and goes to the next level. While the post doesn’t directly declare the exact model of the minivan, we’d guess it’s a Plymouth Voyager that the crazy concept is based on.

In taking the Plymouth from docile family carrier to big tire barnstormer, many modifications were made. Although this is just a render, we think the body-work is undoubtedly the biggest job. Following the comprehensive weight reduction, the car also boasts massive drag slicks in the front and super skinny tires in the back. It’s a bit of a weird setup compared to what you’d see at the NHRA, but not out of this world.

Following the bodywork and new shoes, the car also received a four-cylinder Mitsubishi 4G63 powerplant, one of the creamiest motors the Japanese automaker ever built. According to Abimelec the 4G63 is in the family as the original minivan came with a very similar 4G54. We guess that the uprated version of the Mitsubishi heart will allow for much more headroom for future performance upgrades.

What do you think of this completely bonkers minivan concept? Would you be more inclined to do the school run if you could go straight to the drag strip afterward?