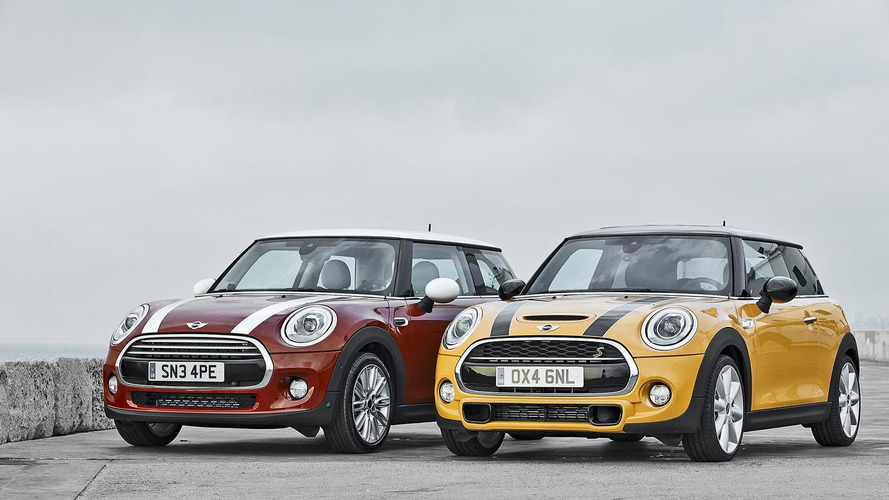 The all-new MINI has been officially revealed, following a leak from several hours ago.

The all-new MINI has been officially revealed, following a leak from several hours ago.

Despite being called a "MINI", the new model is 98mm longer, 44mm wider and 7mm taller than the outgoing generation, while its wheelbase has been stretched by 42mm to 2495mm. In addition, the track widths have been enlarged by 42mm front / 34 mm rear. As a result of the increased dimensions (3821mm length, 1727mm width, 1414mm height), the new MINI not only offers more interior cabin room but also 211 liters of cargo capacity, a significant increase of 30 percent.

MINI says the new model is "completely new from the ground up" yet its design hasn't been changed that much compared to the previous model, albeit with a few hints of the Rocketman concept. Upon launch it will be available with a choice of three turbocharged Euro 6 compliant engines featuring stop/start technology.

These engines will send power to the front axle through a standard six-speed manual gearbox or an optional six-speed automatic. There will also be a sport version of the auto with quicker shift times and paddle shifters.

Engine offerings will be expanded sometime next year with the introduction of the lower-spec One and One D, as well as a more powerful diesel in the Cooper SD and the flagship JCW derivative.

The new MINI will be available with optional Variable Damper Control which will offer two settings: Comfort and Sport. 15-inch alloys will be standard on the Cooper and Cooper D while the S gets 16-inch rims. For more money clients can configure their car with various alloys in sizes of up to 18 inches.

Riding on BMW's UKL1 platform, the 2014 MINI is the first car in its segment to have full LED headlights and taillights. The upper-spec versions pack a generous 8.8-inch infotainment system operable via a choice of two controllers similar to BMW's iDrive. The cabin has gained better materials and can be optionally fitted with lots of assistance systems and a tilt adjustment feature for the 60/40 rear bench.