24 Hours Of Le Mans Virtual: Here's Every Custom Livery For The Race

We get our first look at the safety car, too.

This Saturday will be quiet in Le Mans, France. The year pilgrimage to the northwest part of the country by racers and race fans alike is on hold due to the coronavirus. However, that doesn't mean the weekend is free of motorsports. Fans will be able to enjoy the 24 Hours Of Le Mans Virtual, an online, 24-hour race that'll take place in the rFactor 2 simulator and broadcasted around the world. The flag drops this Saturday, the original race's scheduled date, and there'll be 50 cars on the track along with the safety vehicle. Here's our first look at those liveries with a comprehensive spotter's guide.

The liveries look like the real thing, with official sponsor logos and plenty of creativity baked into the designs. One Team Project 1 car stands out with a big eye on the door as the colors transition from black to red and orange to purple and back to black. R8G Esport Team's Corvette C7.R GTE, with its white, teal, and orange color scheme, is hard to miss. Fans of simpler liveries should enjoy Ferrari – AF Corse's restrained red Ferrari. Rebellion Williams Esport's red-on-black that transitions to a light blue also looks good.

Are You Ready For This Weekend's Race? 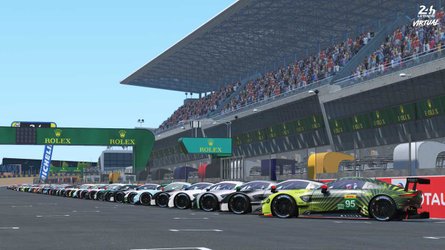 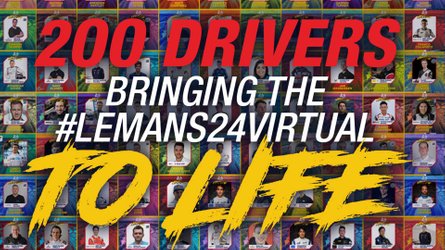 Leading the virtual race, and acting as the race's safety car, is the MissionH24 hydrogen prototype LMPH2G, which completed its first lap of the iconic circuit just before last year’s race started. It's a project spearheaded by race organizer Automobile Club de l'Ouest and GreenGT, a pioneer in high-performance electric-hydrogen vehicles. The car's development driver, Olivier Lombard, will pilot it in the race alongside sim-racer Aurélien Mallet.

Organizers for the virtual race are going all-in on making the event a high-quality production. It'll not only broadcast live on TV around the world, but there'll be race analysis, pit reports, on-air guests, and more for the entirety of the 24-hour race. There'll also be a live TV studio. The digital flag drops at 3 p.m. CEST, 9:00 a.m. EST, Saturday, June 13.

MissionH24, leading car and safety car at the 24 Hours of Le Mans Virtual

MissionH24 will be in the limelight at the 24 Hours of Le Mans Virtual on 13-14 June 2020, with its hydrogen prototype featuring as lead car and safety car at the first ever esports race of its kind. Behind the wheel on the rFactor 2 simulator, LMPH2G test driver Olivier Lombard and Aurélien Mallet, sim racer.
At 14:42 on 15 June 2019, the MissionH24 hydrogen prototype LMPH2G completed a lap of the iconic 24 Hours of Le Mans circuit, just minutes before the flag went down to start the 87th running of the world’s greatest endurance race.

MissionH24 is spearheaded by Le Mans 24 Hours organiser the Automobile Club de l’Ouest, and GreenGT, a pioneer in high-performance electric-hydrogen mobility. The project, backed by Total, aims to promote hydrogen technology and propel motorsport and endurance racing towards an era of carbon-neutral, zero-emissions mobility! The project’s ultimate goal is to compete in a dedicated hydrogen class at the 2024 24 Hours of Le Mans.

On 13-14 June, the LMPH2G electric-hydrogen prototype designed by GreenGT and developed to race by H24Racing will take part in the 24 Hours of Le Mans Virtual, the world’s biggest esports endurance event organised by the ACO, FIA WEC and Motorsport Games.

The trailblazing prototype will lead the way for the 50 teams on the grid, made up of professional racing drivers and esports specialists. The car will be sporting a BWT livery for this special event.
The LMPH2G will be steered by Olivier Lombard, the car’s development driver, and by sim-racer Aurélien Mallet, and will also serve as safety car during the race.

The arrival of MissionH24 and its racing prototype in the world of esports proves the widespread appeal of the real and virtual racing environments for the mobility sector. The energy transition is a concern shared by people of every generation from every corner of the world, keen to see the practical solutions electric-hydrogen technology can bring.