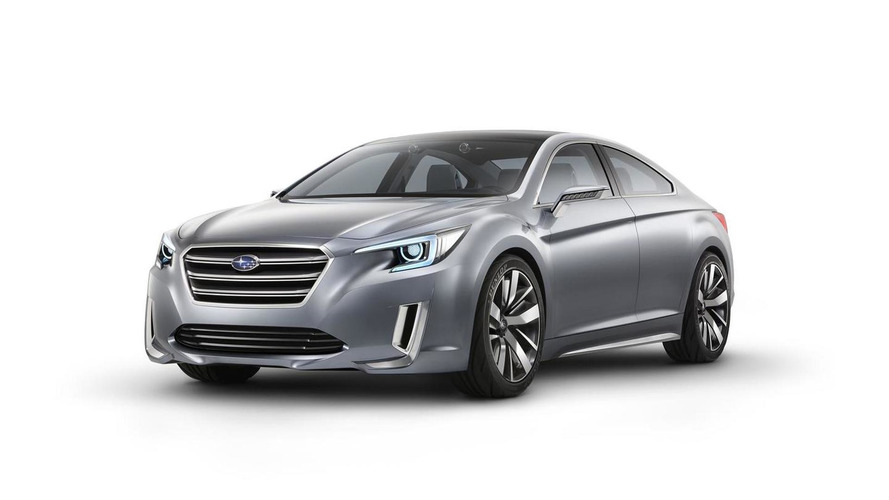 Subaru will be previewing the next generation of the Legacy with this sleek concept next week at the Los Angeles Auto Show.

Subaru will be previewing the next generation of the Legacy with this sleek concept next week at the Los Angeles Auto Show.

The attractive mid-size four-door coupe adopts a hexagonal front grille derived from the Viziv concept and comes with a pair of futuristic headlights. The front fascia also hosts two vertical vents and a generous lower grille featuring chrome touches. The side profile reveals musuclar wheel arches and beefy skirts, while the slender mirrors, sloping roofline and the lack of door handles complete the look.

At the back there are C-shaped taillights which closely resemble the headlights, along with a diffuser and aluminum silver garnishes. The Legacy concept is wearing a bespoke "Ocean Silver Metallic" exterior paint which mixes a light blue metallic silver hue with a metallic sheen.

Images of the interior were not released but Subaru says the concept's cabin was created to provide high functionality and has enough space to host four people. It comes with brown leather upholstery with blue accents and has a multi-function screen installed at the center of the instrument panel which can be also operated by using a smartphone or tablet. There's also a sporty three-spoke steering wheel and an angled shifter to provide a sportier driving position.

The Subaru Legacy concept is 4930mm long, 1940mm wide and 1500mm tall, with a 2880mm wheelbase and 21-inch alloys shod in 265/40 ZR21 tires. Details about what powers the concept haven't been provided but since it seems to lack exhaust pipes, we are inclined to believe this is an electric car. Subaru did say the Legacy concept boasts the firm's symmetrical all-wheel drive system and that it comes with the EyeSight advanced driving assistance system.

The concept will be showcased next month at the Los Angeles Auto Show together with the production version of the WRX teased (and possibly leaked) earlier this week. The next-gen Legacy will probably be introduced in production guise next year as a 2015MY.