Koenigsegg And Polestar Are Collaborating On 'Something Exciting' 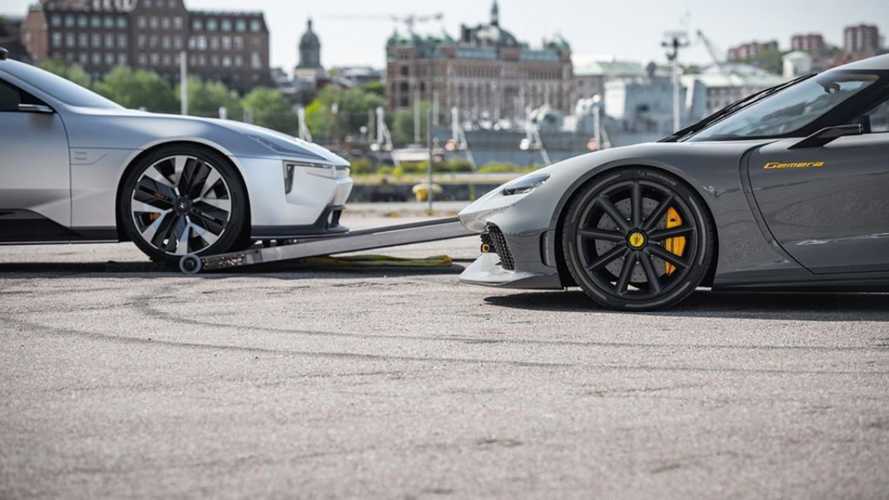 It involves the Gemera and Precept Concept, but what could it be?

Koenigsegg and Polestar have at least one thing in common. Both companies call Sweden home, but a new Instagram post from Koenigsegg suggests there’s more commonality between the brands than meets the eye.

As we see below, Koenigsegg shared a photo showing the front clips of two cars. One is the new Gemera four-seat hypercar, recently unveiled at what would’ve been the Geneva Motor Show. The other is the Polestar Precept Concept, another car that was slated for a Geneva Motor Show debut. As for an explanation, the teaser post only tells us that something exciting is coming and we should “stay tuned.”

The teasing isn’t limited to Koenigsegg, however. On Polestar’s Instagram feed we get another photo of the two cars, this time showing their backsides. The text with this post is just as vague, though we’re at least told the meetup is happening on Sweden’s west coast. “Stay tuned” is mentioned again, so this isn’t some off-the-cuff collaboration. We sense deeper plans and a clear strategy at work here.

Unfortunately, we’re as in-the-dark on this as everyone else. We’ve heard nothing on the rumor mill from insiders regarding a Polestar-Koenigsegg collaboration, but there’s certainly some additional commonality between the two brands beyond their Swedish roots.

The Gemera is Koenigsegg’s take on a four-seat GT car with at least some measure of practicality, offering seating for four and enough space for groceries or suitcases. It’s also supremely electrified as a plug-in hybrid, using three electric motors along with a twin-turbocharged three-cylinder engine to develop a staggering 1,700 combined horsepower.

The Polestar Precept Concept is also electrified – as are all Polestars – and performance is part of the company’s ethos. Though it’s a concept, the Precept previews styling that will be used on the upcoming Polestar 3, which is an SUV. Given the popularity of SUVs these days, we’re forced to ask a question – might Koenigsegg and Polestar work together to build a bonkers mega-powerful crossover?

That’s obviously total speculation, and to be completely honest, this meeting-of-the-brands on the Swedish coast could simply be a cool photoshoot of electrified performance machines. We will dig through our sources in search of additional information but for now – as the Instagram posts advise – we’ll simply stay tuned.