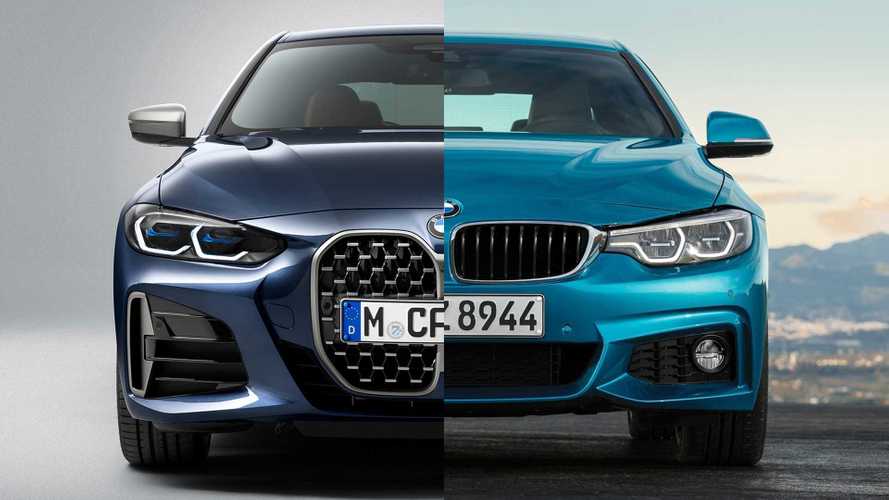 Checking out the G22 BMW 4 Series alongside its F32 predecessor.

As expected, the 2021 BMW 4 Series wears a fancy new set of duds, doing its best imitation of the Concept 4 from last year. That means a bold new grille, but softer contours otherwise, as well as taillights, an interior design, and styling details that borrow liberally from the closely related 3 Series sedan.

But what does the new 4er (codenamed G22) look like in comparison with the old F32 4 Series?

The most obvious differences appear up front. The BMW Concept 4’s controversial grille has carried over mostly unscathed to the 2021 4 Series, bringing massive apertures that incorporate a license plate mount within the structure instead of below it. Also gone is a split grille element – as on the 2020 7 Series, the BMW-signature twin kidney grille is now conjoined into a single piece instead of two separate bits.

In addition to the enlarged central grille element, BMW added combo air curtains / bumper air vents that are substantially bigger (at least on the model seen here), and fog lights have been integrated into or supplanted by thinner LED headlamps. Note that BMW’s modern, hexagonal LED light signature persists into 2021, providing a visual link to the predecessor.

Viewed in profile, the 2021 4 Series is softer and more graceful than the predecessor, but there are a few visual surprises. The fender-mounted air vent now cants to the rear, reminding us ever so slightly of the first-generation Z4. Gone is the F32’s bold shoulder line, replaced with haunches that remind us too much of the Ford Mustang and Infiniti Q60. Tying the 4 Series even closer to the former coupe is a rear quarter window treatment that wholly abandons BMW’s signature Hofmeister kink, an inexcusable omission in the eyes of this author. We see a toned-down Hof on the current 3 Series, but the 4 Series is the first production Bimmer since the BMW Z3 Coupe (and various convertibles) to not sport the design element.

The rear of the car is very nicely composed, with an LED taillight signature that recalls that of the headlights. The model in these photos also features a sculpted rear bumper with vertical vent elements on the sides and a large diffuser-aping blackout panel down low. Geometry is still the order of the day at BMW, used to good effect on the back of the car.

Inside, the 2021 BMW 4 Series is a lovely piece of kit. While the outgoing 4 Series had a somewhat disjointed center console design and an unusually shaped horizontal piece of trim (in metal or wood, depending on the model), the new 4 is a much more cohesive design. We especially like the new design of the center console, with a gentle slope under the center stack that hides a storage cubby. The air vents and quadrilateral infotainment display are much better integrated into the design as well.

Overall, the design of the 2021 4 Series is relatively cohesive, but our opinions on its styling are split. Some Motor1.com staffers like that BMW is taking risks, while others can’t stand the buck-toothed grille. And still more of us find faults with the new 4 that have nothing to do with the big kidneys. But with buyers – not pundits – responding positively to the outsized 7 Series, X7, and various concepts, plan on seeing similar designs from BMW in the future.