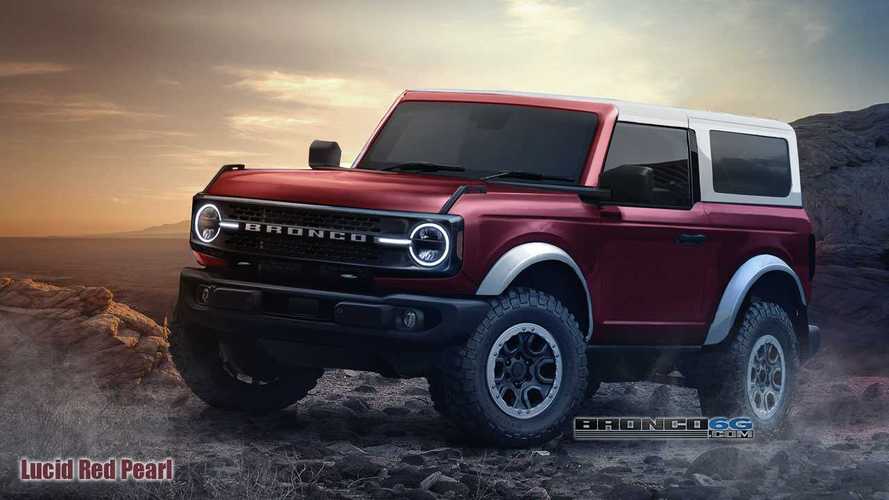 Back in March, the exterior paint colors that’ll be available on the 2021 Ford Bronco leaked online, as these things tend to do. The leaked revealed there’ll be 10 available colors – Oxford White, Race Red, Absolute Black, and Cyber Orange Pearl, to name a few. Today, we have renderings from Bronco6G.com that show off the assortment of colors on both the two- and four-door versions of the Bronco. But the renderings go a bit further than showing off exterior colors – white grilles, white fender flares, and a white removable roof are also included.

Surprisingly, a white roof with the white fender flares pops against several of the colors while the black versions keep the SUV’s appearance a bit more understated. Even a white roof paired with a black grille and fenders looks good, though the two-tone paint scheme reminds us of the misunderstood Ford Flex. What seems odd is the white grille against the cacophony of colors with the white fenders and roof. It’s bold, and certainly stands out, but we don’t know if it’ll have a white grille just yet.

Ford Bronco Raptor To Get 3.0-Liter V6 From Lincoln Aviator?

What we do know is that there’ll be three grille designs when the Bronco arrives: Modern, Classic, and Custom. We may have seen the Modern grille already – that black one with the bold BRONCO lettering in the middle – which is the same grille we see in the renderings, but in both in black and white. We won’t know more until Ford reveals the thing, but that latest rumors suggest the Bronco will come with a seven-speed manual gearbox along with the infotainment system from the next Ford F-150.

We don’t know when Ford will reveal the 2021 Bronco, though we were supposed to see it something this spring. However, we do know that the coronavirus pandemic, which caused factories to close around the world, will delay Bronco production from starting on time. Until then, as each day gets us closer to the reveal, we can still enjoy the countless renderings and rumors to keep us excited about Ford’s new off-roader.