The decals around the headlights are comical.

The refreshed Porsche Panamera appears very close to a debut because the latest batch of spy shots catch one on the road with barely any camouflage. This one wears bronze-colored wheels and four exhaust pipes that make the exterior look particularly mean.

The engineers put big decals around the headlights of this car, but they don't hide much. Otherwise, there's no obvious concealment. The front fascia has slight styling tweaks but is very similar to the current look. 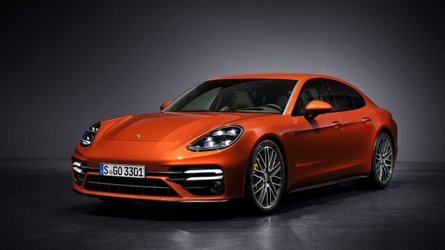 At the back, the taillights are generally the same shape but now have a white section in the center. Looking closely, there appears to be some concealment on the rear deck that could be hiding the size of the taillights. The exhaust layout is similar to the general look as the current GTS model but with a different finish.

The engineers also appear to cover the area between the exhaust pipes. The most likely thing to hide would be a small diffuser.

Inside, earlier spy shots indicate that the most significant change would be adopting a steering wheel like the one on latest generation of the Porsche 911.

Powertrain changes for the refreshed Panamera are still a mystery. There are rumors of a flagship variant on the way that goes by the codename "Lion." The model would reportedly share the basic powertrain with the Turbo S E-Hybrid but push the output to as much as 820 horsepower (612 kilowatts).

The debut date for the refreshed Panamera is still a mystery. However, Porsche seems to be embracing the concept of premiering vehicles online, like for the 911 Targa, in the absence of any international auto shows happening. Don't be too surprised if this unveiling occurs sooner rather than later.