The refreshed 2020 Nissan Patrol provides a few hints at what to expect.

The current, second-generation Nissan Armada went on sale in late 2016 for 2017, and new spy photos show the automaker working on its refresh. The hulking, three-row SUV spars with other behemoths like the Toyota Sequoia, Ford Expedition, and Chevy Tahoe, and the mid-cycle redesign should keep it competitive. Swirly camouflage wraps hide the changes Nissan will make, though we have a good idea of what to expect. Nissan updated the Patrol for 2020, the Armada’s stablemate, revealing the redesigned SUV last September. It previewed many of the tweaks we expect the Armada to receive.

At the front, we can spot the updated headlight design, which looks identical to the one on the Patrol. The two appear to also share a similar front-end design with sharper angles and creases. What we can’t well discern is the design of the new bumper. The Patrol features deeply set bumper inserts that we can’t see underneath the Armada’s camouflage. It’s a similar song at the rear, with the camo concealing new taillight designs and a tweaked bumper.

The Latest From Nissan:

Inside, there could be some changes made to the infotainment system, which the Armada’s Infiniti counterpart, the QX80, did recently receive. It wouldn’t hurt for Nissan to update the aging system that’s in the current-gen SUV, giving it the same 8.0-inch, or available 9.0-inch, infotainment screen introduced in the redesigned 2020 Titan, which shares its underpinnings with the SUV.

The 5.6-liter V8 that powers the current Armada will likely power the refreshed one, too. However, Nissan will probably give it the same tweaks it made to the 2020 Titan’s mill, increasing horsepower – up 10 (7.45 kilowatts) – and pairing it with a nine-speed automatic. The current mill produces 390 hp (290 kW) and pairs with a seven-speed unit. 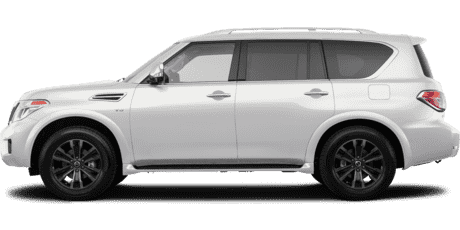 Yesterday, Nissan announced the restructuring plan it hopes would succeed by the end of the fiscal year 2023 for the company. Part of that plan included introducing 12 new models over the next 18 months. The Nissan Armada is just a sliver of what Nissan has planned, and while the changes aren’t substantial, the Armada isn’t due for a complete redesign just yet. The 2021 Armada should arrive this fall.