This Guy Makes Automotive Portraits On Newspapers, And It's Brilliant 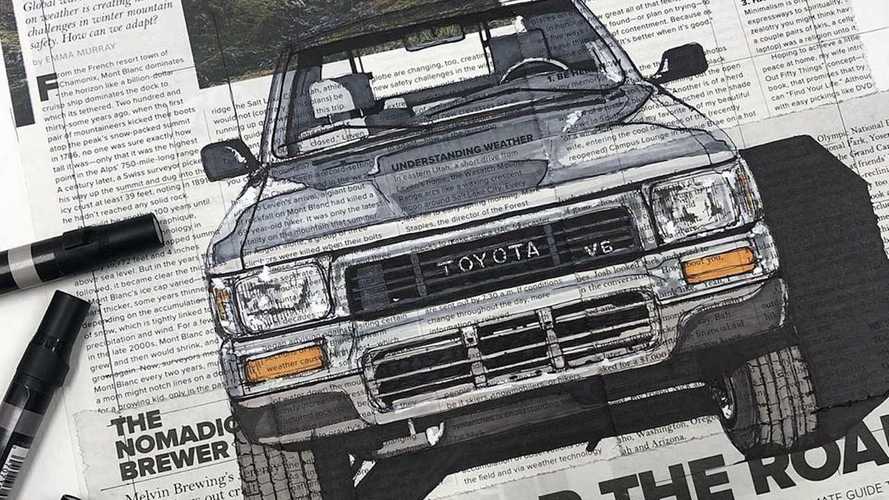 What started as a 'late night screwing around' turned out to be something beautiful.

Portrait paintings are among the hardest forms of art. The process of capturing a person's character and emotion is reserved for the gifted. Even the faintest smile could make or break a portrait, which is one of the reasons why Mona Lisa has become so popular among artists and enthusiasts alike.

Adam Ambro, a full-time architect from Golden, Colorado, tries to capture these characters from vehicles and paints them on newspapers as the canvas. It's a daunting task, but one that he's able to pull off nicely in these works of art.

Ambro refers to his works as automotive portraits. A cross between illustration, technical drawing, and fine art, he seeks to portray these cars on his unique canvas while using markers as his painting tools. While most of his works feature popular off-roaders and adventure vehicles like the Land Rover Defender or Jeep Wrangler, Ambro wasn't particular with the subject for his artwork.

"Regardless of the make and model, certain cars just seem to have a unique character. It's this character that I'm after," he said in an interview by Motor1.

According to him, the whole idea started as "some late night screwing around" during his architecture graduate school. Markers and newspapers were the materials available at that time, but using his knowledge in watercolor painting, he was able to turn them into something brilliant.

A Closer Look At Some Automotive Designs

A lot of Ambro's early commissions but currently, he's trying to be particular with the subject involved. A specific piece takes around two to three weeks to finish, depending on his schedule, of course, but motivation always stands as his initial cue.

You can see Ambro's other works on his website and Instagram. There are pre-made pieces there with prices starting from $20 up to $80. If you want your personal vehicle to be made into an automotive portrait, don't hesitate to drop Adam Ambro a message and see if he's up for the job.