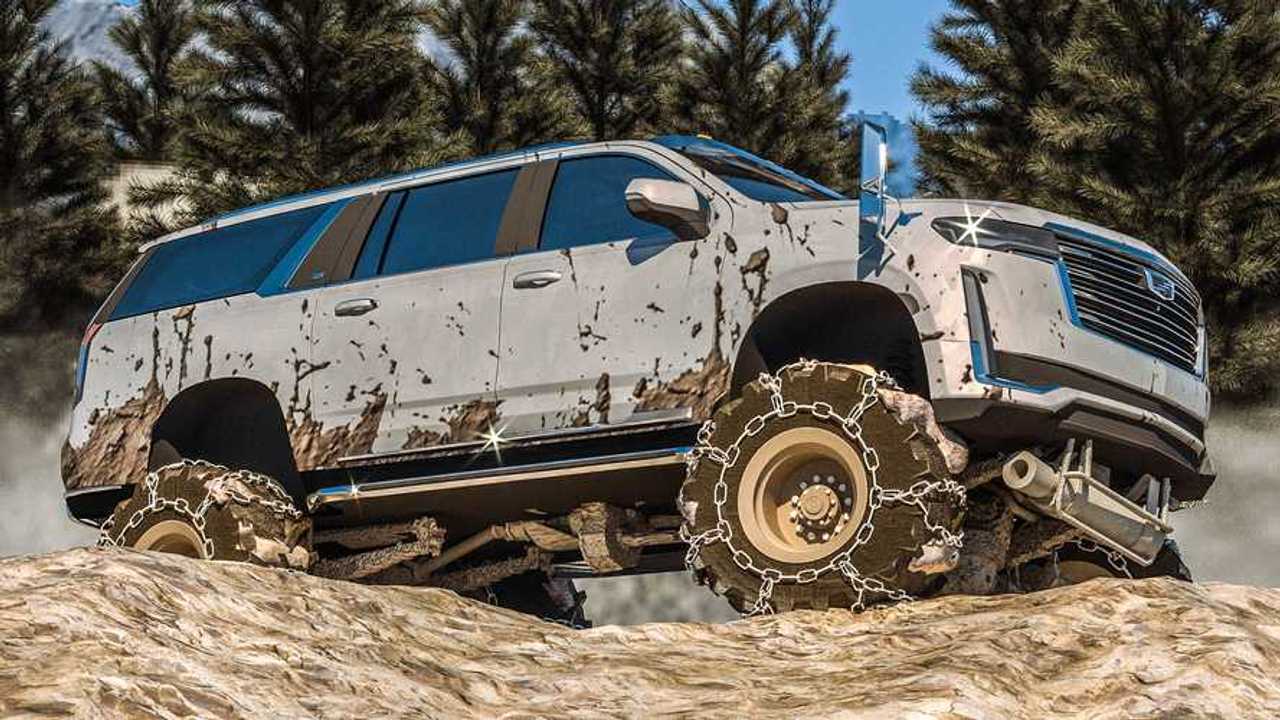 And we still want it so badly.

The 2021 Cadillac Escalade is probably one of the least likely vehicles to be turned into a monster truck, but that didn’t stop the rendering artist known as Adry53 from creating one of their own. Known primarily for modernized versions of American muscle cars, Adry53’s attention went to an Escalade ESV recently, turning the big Caddy into a purpose-built snowcat and mud runner.

Adry53’s modifications look completely out of place on the Escalade, which is partly why we like them so much. The bodywork, right down to the chrome bumper accents and rectangular exhaust outlets, is stock, although the rendering artist added fantastic big rig–style fender-mounted mirrors and chrome tubular side steps. There’s either a splash-effect wrap or mud splatters along the bodysides, giving the term “Cowboy Cadillac” new meaning.

Sitting underneath is a robust ladder chassis carrying solid front and rear axles, a departure from the independently suspended – though still body-on-frame – 2021 Escalade. The artist also took pains to give the rendering tough driveline components, including a sturdy-looking transfer case and beefy driveshafts.

Bog-ready floatation tires with big, delta-shaped lugs recall those original monster trucks of the 1970s and 1980s, lending a very retro flair to this rendering. We’ve seen lifted ‘Slades before, but they usually ride on massive chrome wheels and low-profile tires not much thicker than a rubber band. Seeing one, even virtually, that’s built for legit off-road work is equal parts hilarious and inspiring.

Turning a real-life Escalade into a mud bogger like this would be challenging, but probably not impossible. The Cadillac SUV shares many of its underpinnings with the Chevrolet Silverado 1500 and GMC Sierra 1500, both of which have live rear axles and can be outfitted with aftermarket solid front axles. Swapping in one of those trucks’ low-range transfer case would be necessary, too.

Such a project is probably a pipe dream with a nightmare budget. The 2021 Chevrolet Tahoe tops out at more than $85,000, so we bet a fully optioned Escalade ESV will cost at least $100,000 or more. Not many folks willing to shell out six figures for a luxury SUV would want to immediately start ripping it apart. Maybe Adry53's rendering will inspire some rich eccentric, and if they’re reading this, we want to drive it.