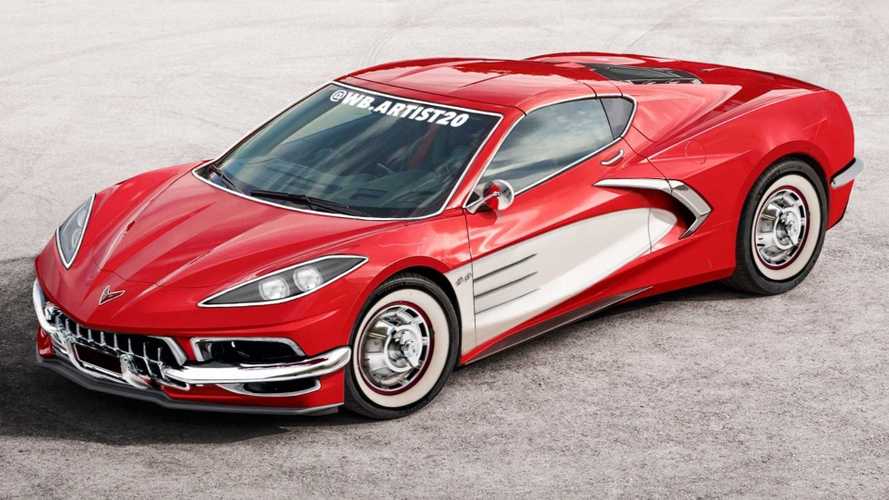 The retro cues are an intriguing juxtaposition with the new Corvette's angular styling.

What if the designers of the Chevrolet Corvette C8 used the design of the C1 as the primary inspiration for the new generation? A new rendering from wb.artist20 shows how this combination of retro and modern might look.

The elements at the front are the primary cues that wb.artist20 retains from the C1 for his C8 rendering. There are now bumperettes at the corners of the fascia. The grille's styling has a central cross member with vertical uprights. The artist puts a pair of circular headlights in each of the C8's bezels, and this quad-lamp design doesn't appear on the original Corvette until the 1958 model year. Naturally, as a vehicle borrowing cues from the late-1950s, there's lots of chrome, too.

Along the side, the rendering incorporates the scalloped section behind the front wheels from the C1, and this gives the C8 a retro, two-tone color scheme. Simple, circular mirrors and an exposed door handle add more old-school touches. Looking towards the back, you can see the thin, chrome bumper wrapping around the body.

As a final touch, the rendering features a modernized take on the classic wheels. They have the same design but are clearly larger. Finding whitewall performance tires these days would be a challenge, though.

Toying with the idea of combining the first-gen Corvette and the new model is something that other rendering artists are also trying. For example, the gallery above shows Abimelec Design's take on the concept. However, instead of giving the latest 'Vette the looks of a C1, he applies the mid-engine layout to the original. With the gentle curves and vented rear deck, the result looks like a Chevy designer taking inspiration from the Porsche 550 Spyder in the mid-1950s.