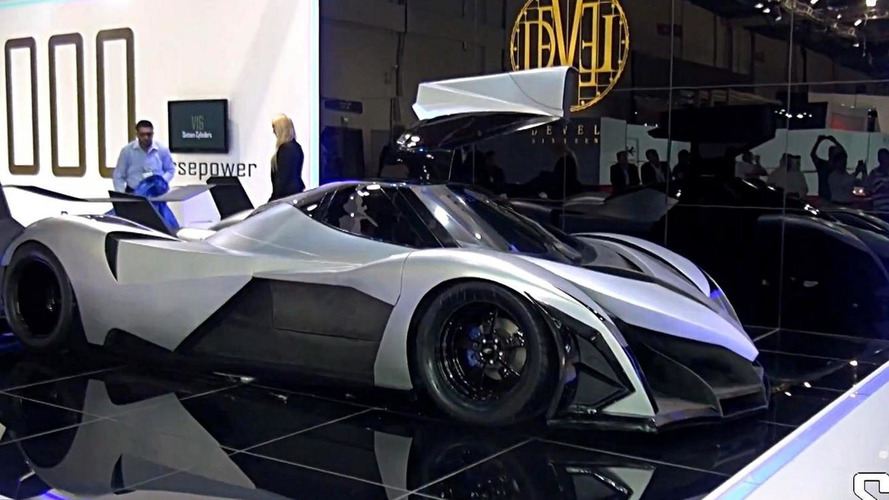 Former WCF editor Atanas Markov provided us with some details about the Devel Sixteen which is being showcased at the Dubai Motor Show.

Former WCF editor Atanas Markov provided us with some details about the Devel Sixteen which is being showcased at the Dubai Motor Show.

Currently the Sports Editor at Autobild Bulgaria and BBC Top Gear Bulgaria, Atanas attended the event and had the opportunity to sit down with the president of the company and have a chat about the outrageous car. Majid Al Attar said the engine was developed in the United States and was built from the ground up. Initially, the engine was rated at 1,000 bhp but eventually got up to 2,000 bhp, 3,000 bhp and finally to 5,000 bhp.

The car being exhibited in Dubai is just for show while the production model is going to be smaller in size. Majid Al Attar said the Devel Sixteen's design is inspired by the F-16 but clearly the car shows cues from the Lamborghini Egoista and Veneno. The production version will cost 1M USD and already three clients have placed an order.

The company is managed by three brothers who themselves have no less than 250 cars, ranging from classic and racing cars to SUVs and supercars. They are competing with W Motors and their Likan Hypersport which is also being showcased in Dubai. The Likan is a lot more expensive as it carries a starting price of 3.4M USD but even so W Motors sold three units so far.

Our thanks go to Atanas Markov for all the details!