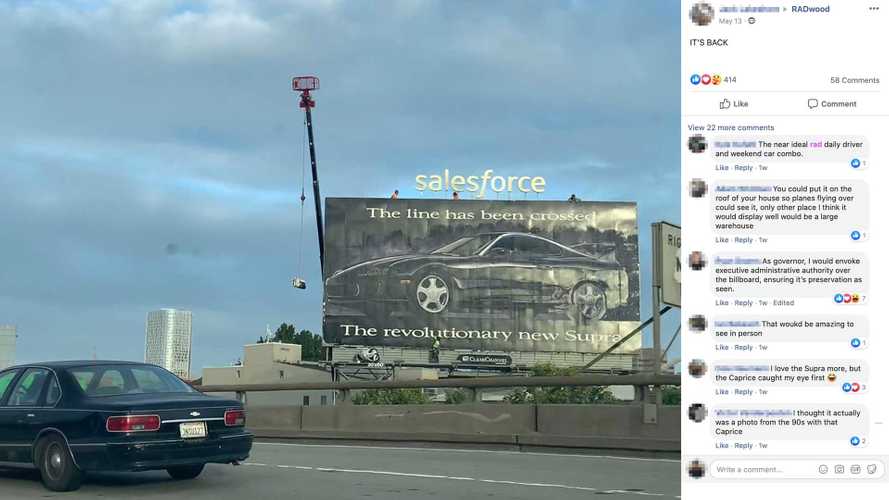 It's the last of its kind, literally.

Toyota is currently busy promoting the 2021 Supra and even has some huge discounts for the previous model year of the sports car. If you spot a Supra billboard, don’t be surprised - it’s the company’s flagship performance vehicle developed in cooperation with BMW. However, if you spot this 27-year-old Supra billboard, you should know there’s a very interesting story behind it.

If you are driving down Highway 101 in San Francisco, look for a former warehouse in the SoMa neighborhood. It’s where this giant billboard has been sitting since 1993 and is now making waves again, almost three decades after it was originally installed. So, why has it been sitting there for so many years with the Supra ad showing up from time to time? A new article from TheDrive shines more light.

The billboard is currently owned by Clear Channel Outdoor, a national billboard and display ad company. The online publication called the firm’s regional president Bob Schmitt, who explained that billboard ads used to be hand-painted back in the 1990s and this particular Supra ad was the last painted one before the company switched to the newer vinyl technology. CCO decided to use the Supra ad as a base for all future ads on that spot rather than waste money and time to paint it black first.

Ford And Chevy Dealers Duke It Out In Billboard Battle

Ford Now Holds Record For The Biggest Billboard Ever

Schmitt also added that workers need about two hours to swap out vinyl billboards and this process happens at random times. Basically, there’s a very tiny window every now and then when the 1993 Supra ad is visible. Roughly, six to eight non-consecutive hours total in a year. Those brief moments when the ad is visible is another explanation why it’s held up so well - it’s not exposed to sun and rain all the time, after all.

Photo: Screenshot from RADwood group on Facebook by TheDrive