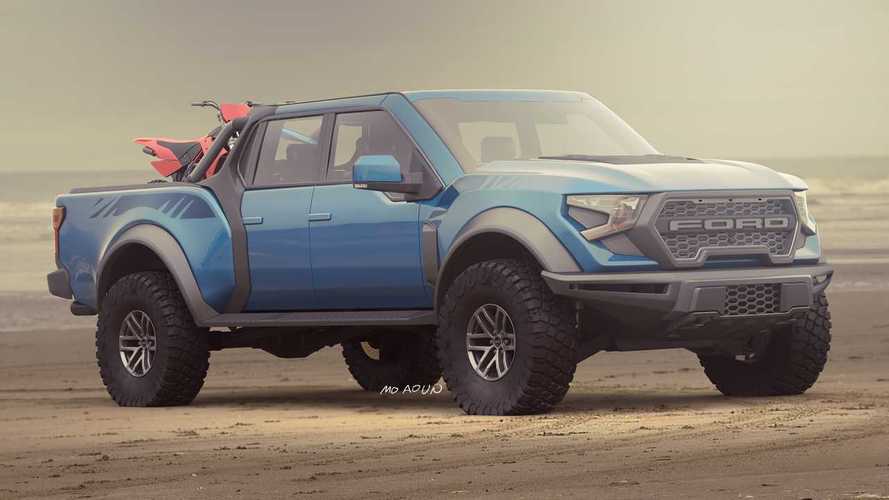 This is what a new Ford F-150 Raptor could look like... in the distant future.

The Ford F-150 Raptor is a fantastic vehicle – it's fast, tough, and looks great. And over two generations, it's been the go-to truck for fans craving something even tougher than the traditional F-150. But as the F-150 range readies for a complete overhaul, so too does the Raptor; the current off-road model will likely get replaced by an all-new one.

With that in mind, we've imagined the upcoming 2021 Ford Raptor ourselves, but rendering artist Mo Aoun has an even edgier Ford Raptor envisioned for the distant future. And his concept looks sharp. Key features like the "FORD" wordmark in the grille, the iconic 12-spoke wheels, off-road rubber, and rear graphics are obvious nods to the current model. But there are a number of new cues that distinguish this concept from its production sibling.

For one, this Raptor concept looks much edgier than the current model. The headlights have a unique boomerang shape, the grille has a few sharp edges, and the A-pillar extends up into a boxy cabin. There's also some chunky black body cladding that extends down behind the C-pillar as well as wider fenders – front and rear – that connect neatly to the new larger side sills.

The rear of this Ford Raptor concept is especially interesting. Although the bed looks short, it has two unusual cutouts – in this case – for a pair of dirt bikes to fit seamlessly. There's also plenty of plastic cladding to protect the bed, as well as extra cladding on the rear tailgate and bumper designed the make the already tough Raptor even more aggressive.

The artist doesn't say what might power his futuristic Raptor concept, but we have some idea as to what engines will be in the next F-150. The base F-150 should have a naturally aspirated 3.3-liter V6 good for 290 horsepower (216 kilowatts), while the same 3.5-liter EcoBoost, good for 375 horsepower (280 kilowatts), will carry over – and we could even see the return of the iconic 5.0-liter V8. The V8 could be good for as much 395 hp (295 kW). Expect the next Raptor to have one of the latter two engines.

We Drive The Rugged Ford Raptor: