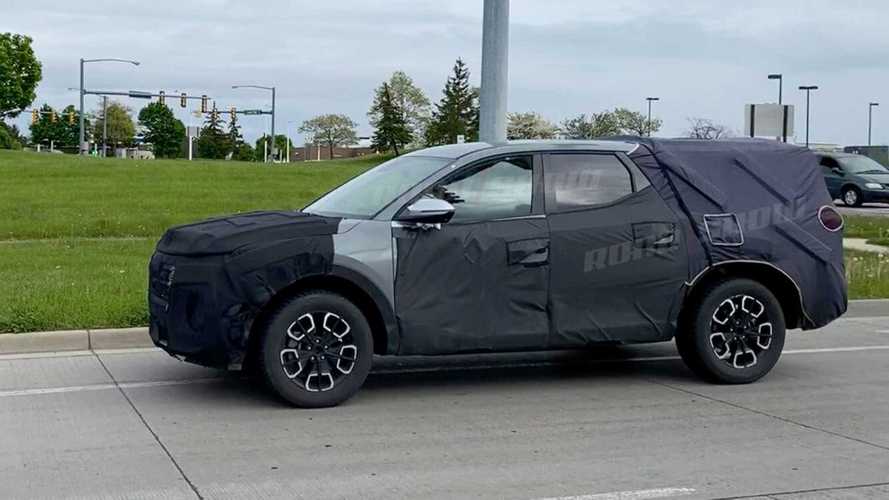 The truck goes into production in 2021.

Spy shots of the Hyundai Santa Cruz's development have been a relatively rare sight in comparison to other models that we know are on the way. Thankfully, Roadshow editor Daniel Golson was in the right place at the right time and snapped these shots of the upcoming pickup on the road in Ann Arbor, Michigan. Motor1.com obtained permission to re-publish the pictures.

Hyundai's engineers keep the truck under heavy camouflage by covering the body in fabric and using blocky panels to conceal the shape further. In front, there's a glimpse of a mesh grille with similar styling as the brand's other current products, particularly the recently teased 2021 Santa Fe.

The company's concealment hides the truck's styling from the side. However, the distance from the rear wheel well to the back of the body suggests that the cargo bed might be rather small. Don't expect to fit a 4x8 sheet of drywall back there. The covering also completely hides the styling at the back.

A leaked image of the Santa Cruz's bare body heavily suggests that it uses a unibody chassis. Most pickups, even midsize ones like this generally use a body-on-frame layout. The major exception to this in the United States is the Honda Ridgeline.

All The Details On The Santa Cruz:

The Santa Cruz will likely be available with some of Hyundai's existing gasoline-fueled engines. There's also a rumor of the company offering a 3.0-liter turbodiesel, but it's not clear whether this mill would be part of the lineup in the US.

Hyundai announced in November 2019 that it was preparing the factory in Montgomery, Alabama, to build the Santa Cruz. Production begins in 2021. When the pickup arrives in showrooms look for prices to start in the mid-$20,000s.