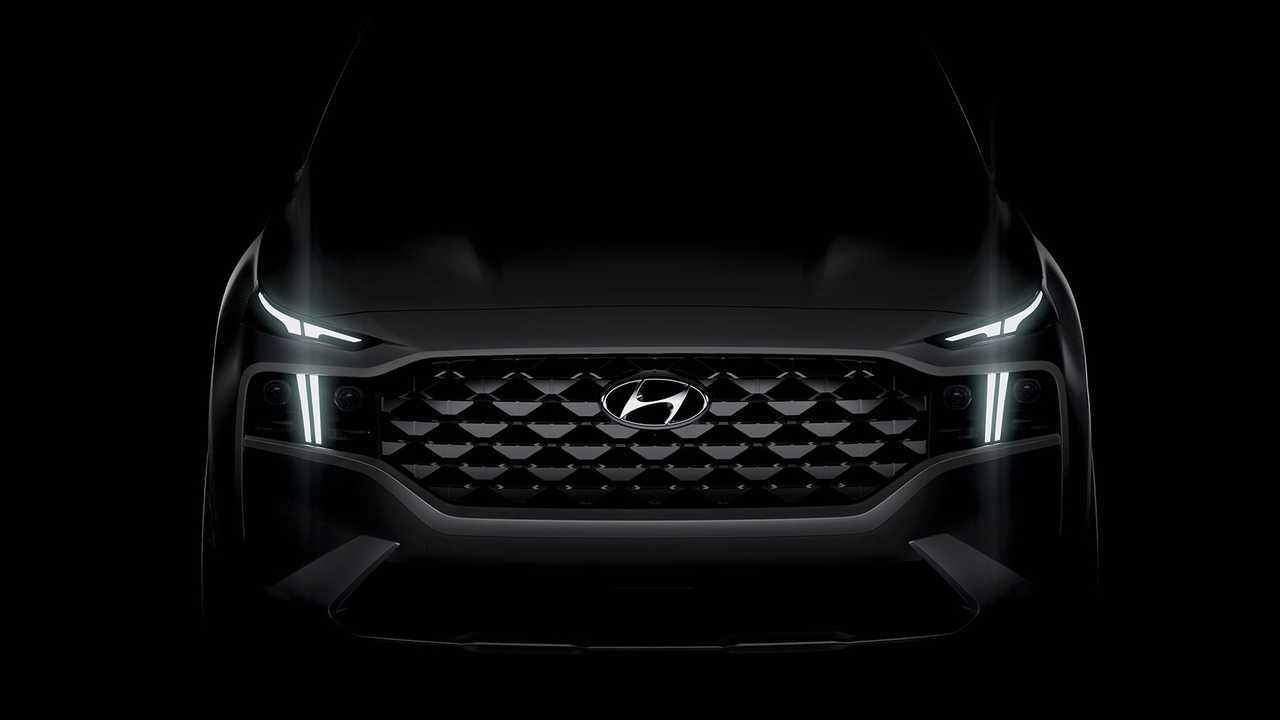 In a surprise move, the Santa Fe is switching to a different platform.

You know how some automakers say a next-generation car is all-new when it’s, in fact, a heavily facelifted version of its predecessor? Well, Hyundai is kind of doing the exact opposite. For the Santa Fe’s mid-cycle facelift, the South Korean brand is changing the midsize SUV’s platform, which is something that rarely happens in the automotive industry. The fourth-gen model (codenamed TM) has only been out for a little over two years, but it’s already going through significant changes.

Two teaser images of the SUV have been published today, showing how the front grille pattern will have a different design depending on the trim level. The 2021 Santa Fe gets an angry-looking set of headlights with vertical daytime running lights extending onto the front bumper to create a “T” shape. To the left and right of the double vertical bars in the bumper we’re noticing some round modules, which could be for the radar cruise control.

Now, about that platform. Hyundai says the Santa Fe will be its first model sold in Europe to ride on an “all-new third-generation vehicle platform.” It will unlock new possibilities in terms of powertrains, with hybrid and plug-in hybrid versions planned. The unexpected switch to a new platform will bring dividends in terms of performance, safety, and handling, according to the press release attached at the bottom.

In Europe, Hyundai plans to launch the heavily updated Santa Fe in September. Meanwhile, additional details will be released in the coming weeks when we’re also expecting to see the SUV in full. It will probably go on sale first in its domestic market, with details about its US arrival to be disclosed at a later date.

Save Thousands On A New Hyundai Santa Fe

26 May 2020 - Enhanced and electrified: Hyundai Motor has released a first glimpse of the new Santa Fe.

The latest generation of the company’s longest-running flagship SUV will feature a dignified and charismatic exterior design, as well as interior design updates providing premium sensibility and comfort.

The teaser image reveals several new design features, including the combined front grille and daytime running light (DRL), as part of the new Integrated Architecture. The wide grille give the new Santa Fe a bold character, while the geometric pattern on the grille adds a stereoscopic aspect. The new T-shaped DRL complete the rugged character and make the new Santa Fe recognizable even from a distance.

Among other enhancements, Hyundai will also introduce a new electrified powertrain line-up, including hybrid and plug-in hybrid options for the first time. In addition, the new Santa Fe will be the first Hyundai model in Europe and first Hyundai SUV globally based on the all-new third-generation Hyundai vehicle platform. The new platform allows for significant improvements in performance, handling and safety, as well as facilitating electrified powertrains.

The new Santa Fe will be available in Europe starting September 2020. More information will be revealed in the coming weeks.