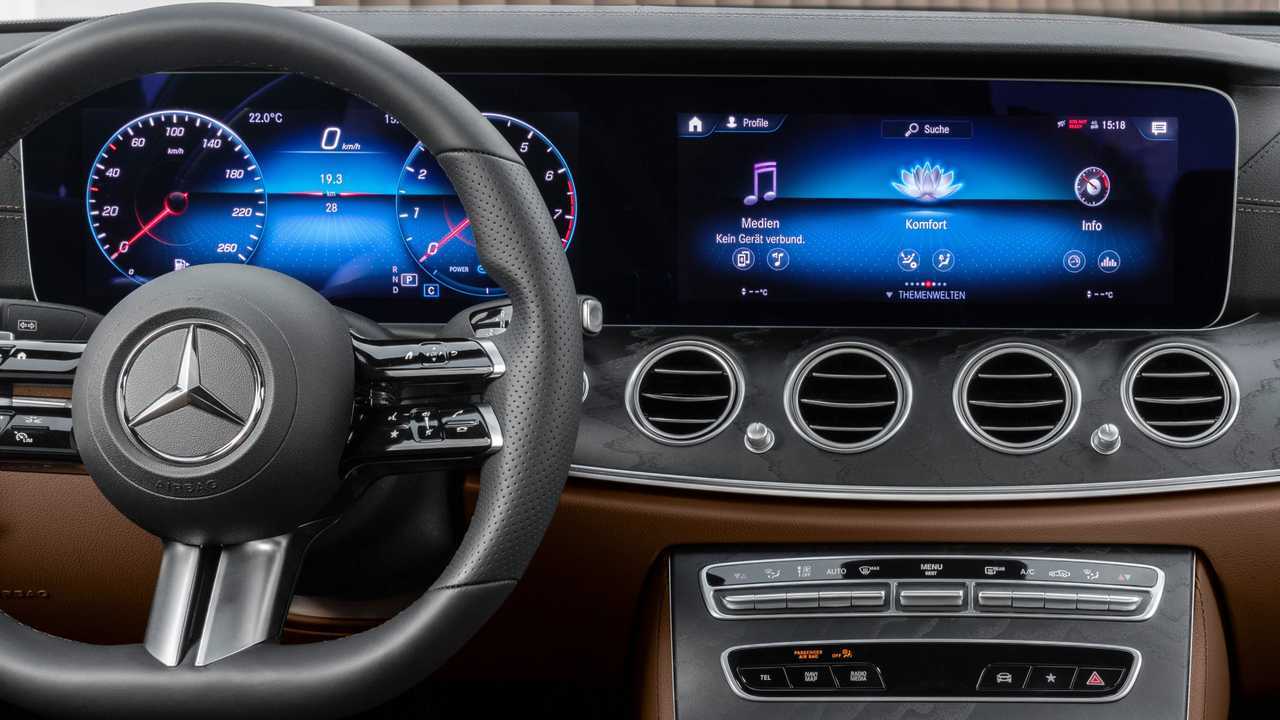 You're going to see that swanky steering wheel in the next S-Class, too.

Mercedes’ teaser campaign for the facelifted E-Class Coupe and E-Class Convertible is in full swing ahead of a May 27 double debut. In this episode, we can catch a glimpse of the interior with its MBUX infotainment system replacing the old COMAND setup. The dual-screen setup is carried over, with the lesser versions featuring a pair of 10.25-inch screens and the fancier models upgrading to a 12.3-inch arrangement for both the driver’s display and the infotainment.

The most noticeable change inside the cabin will undoubtedly be the steering wheel. Introduced earlier this year on the E-Class sedan and wagon facelift, the four-spoke wheel will also be offered in the next S-Class as spy shots have revealed. In the E-Class, Mercedes is going to sell the wheel in three different versions: all-leather, wood and leather, and a supersport design.

The spokes have a glossy black finish and contain touch controls switching from optical to capacitive sensors, while the rim features built-in capacitive sensors to detect whether the driver’s hands are on the wheel. Mercedes mentions the latter sensors work in tandem with the car’s semi-autonomous driving system. On the pre-facelift model, the steering wheel has to be moved to let the assistance systems “know” the driver still has control, but on the updated model the driver will simply have to touch the rim.

If the sensors in the rim don’t detect the driver’s hands for a certain time, warnings will be issued, and ultimately, the emergency brake will be activated. Speaking of safety kit, the 2021 E-Class comes with active systems including stop-and-go assist, steering assist, brake assist, and active blind spot assist with exit warning. There’s even automatic parking on marked areas on top of the already supported parking in parallel and end-on parking spaces.

The switch to Mercedes’ latest and greatest infotainment system will come along with support for augmented tech for navigation, which should make it virtually impossible for the driver to miss a turn. Details such as arrows and house numbers are superimposed straight onto the image in the MBUX’s display, while traffic light guidance is also available where the infrastructure allows it.

With still a full week to go before the 2021 E-Class Coupe and Convertible debut, expect more teasers in the coming days.