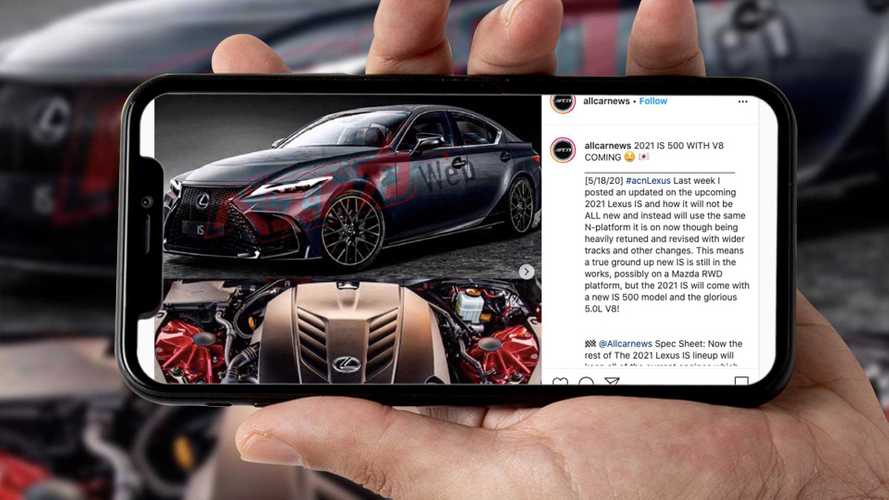 The next-generation small sedan might get the LC 500’s lusty engine.

A V8-powered Lexus IS is supposedly on the way for 2021, but unlike the previous-generation compact sedan, the engine won’t be reserved for an IS F variant.

According to the Instagram page Allcarnews, the 2021 Lexus IS 500 will boast the company’s final application of its 5.0-liter V8. Currently found in the LC 500 and RC F coupes, the engine produces 471 horsepower (351 kilowatts) and 398 pound-feet (540 newton-meters). However, as we’ve reported previously, the next-generation IS will not get a full-blown performance model, likely meaning the IS 500 will take a more relaxed stance on sporty driving. Like the LC 500, expect the IS to offer excellent power and a decadent soundtrack, with reasonable long-distance comfort instead of razor-edged handling dynamics.

Allcarnews received the information from an anonymous insider, so we’re obviously taking the claim that an IS 500 even exists with a big grain of salt. We also don’t know much about the underpinnings of the next-generation sedan. The Instagram page claims that it will ride on an updated version of its current platform, with a wider front and rear track. However, we’ve heard that it will instead use the TNGA-N architecture, a rear-drive version of parent company Toyota’s modular platform that is found under the next-generation Mirai.

If we’re right, TNGA would slice a few hundred pounds of weight from the IS and make it easier to optimize for electrification, which is a key goal for Lexus and Toyota. Another route the automaker might take is an agreement with Mazda, making use of the next-generation Mazda6’s rear-drive architecture (and possibly its inline-six).

Unfortunately, the rumor mill isn’t churning out anything concrete, so until it does, all we have is conjecture. We initially thought we’d see the next-generation Lexus IS by the end of the year, but it’s not clear if Toyota’s plans have changed in the wake of the current coronavirus pandemic.