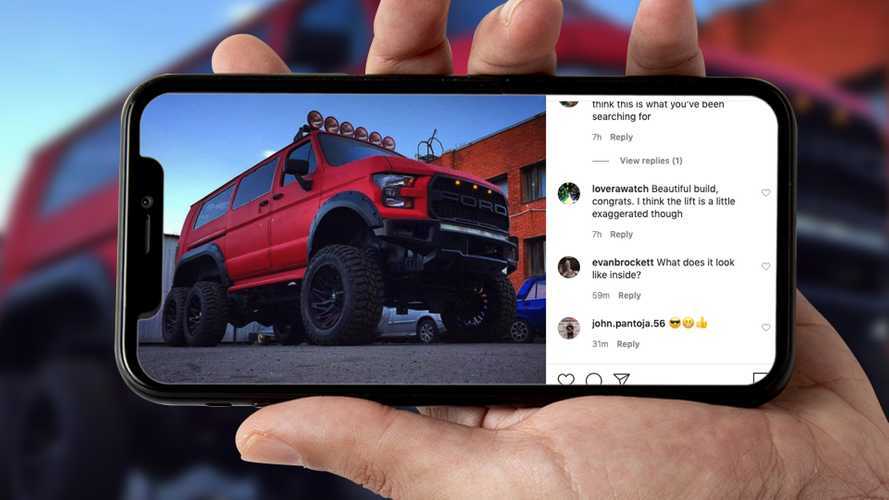 The Raptor face looks good on the Econoline.

Tough isn’t the first word most would associate with the Ford Econoline – the company’s go-to van since 1961. But this isn’t your typical full-size van, either. It’s jacked up with an extra axle and a front end stolen right off a Ford Raptor. It seems better suited for the Baja 1000 instead of flower deliveries, but that’s just us. The creation comes from Ford Market in Moscow, Russia, an aftermarket build shop, and it’s called the Ford RaptorBus.

Crazy 6x6 vehicles aren’t new, but they aren’t typically a van, either. And yet, Ford Market somehow shoved an extra axle underneath, though it looks like a completely new chassis with beefed-up suspension bits and massive 37-inch tires. That alone is impressive, but the RaptorBus goes a step further in its design with the Raptor front end.

Check Out Other Wild 6x6 Vehicles:

This Crazy Custom GMC Motorhome 6x6 Is Far From Finished
⠀

Transplanting the front of one vehicle onto another often ends in disaster, but that’s not the case with the RaptorBus. The grille, headlights, taillights, and bumper look like they belong on the van. The hood seamlessly blends into the grille, too.  The extra cladding over the wheel wells does little to help keep the tires contained underneath the vehicle, but it does add a touch of off-road flair. What completes the van’s look is the bright red paint and light bar on the roof.

Ford Market has a ton of photos of the build over on its Instagram page, which date back to last August before the conversion happened when it sported just two axles, four wheels, and a rough exterior paint job. You should check it out – there are other crazy builds to see. Complete, it stands just over 9 feet tall without the light bar, measuring more than 2.5 feet taller than the Raptor. We have yet to see the interior, though it’s likely just a beefy as the exterior, or so we’d hope. Next time you see an Econoline for sale, you’ll be thinking of the possibilities.