It makes us wish for the road-legal Super Trofeo Omologato variant.

Lamborghini is supposed to grace us with a new Huracan variant this year, but with 2020’s halfway point quickly approaching, we’ve yet to see it. Well, officially see it, anyway. Rumors of the model, the Super Trofeo Omologato – or STO, first popped up last year. It’s supposed to be the road-going version of the Huracan Super Trofeo race car. In March, photos were posted on Instagram of a mysterious, high-winged Lamborghini covered in camouflaged, which left us with more questions than answers. We don’t know when we’ll see it, but that hasn’t stopped others from making it road legal on their own.

The video, taken during the Nürburgring race track’s “touristenfahrten” –public driving – days, shows the carbon-exposed supercar weaving around through traffic. The lack of exterior paint and livery is strange, though it’s not an unlikely sight if the owner went to an aftermarket shop to make it legal for the road. It’s not the first, nor will it be last if Lamborghini continues to build a limited number of track-only models, and customers want to drive them on public roads.

The Super Trofeo Is Super Interesting: 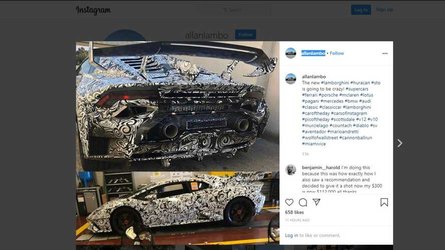 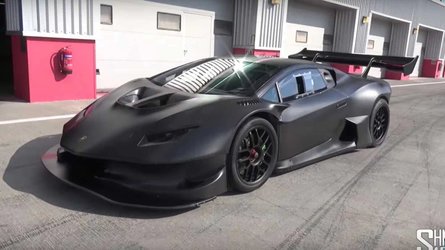 The Huracan STO leaked on Instagram has numerous differences compared to the track-only version, if it’s the real thing. The STO leaked on Instagram has an entirely different rear fascia design with the big exhaust outlets spaced far apart in the bumper. There are new openings just below the taillights, and the entire lower fascia has a new design, though it keeps the aggressive styling of the race version. The STO also sports a different, and wilder, wing, too, while the engine cover has a new design with an intake extending up over the roof.

We’ve heard nothing from Lamborghini about the possibility of a Huracan STO, let alone when we’ll see it. All we have are rumors of such a model in development along with the leaked photos of a mysterious and camouflaged Lamborghini. There’s no telling when we’ll see it now that the coronavirus pandemic has arrived, but Lamborghini still has time before the year ends.