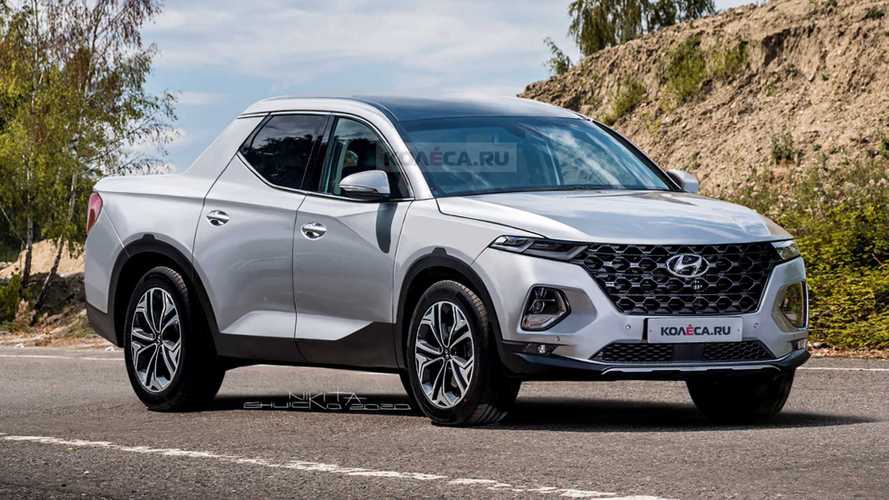 Expect a reveal later this year.

Earlier this month, a leaked photo all but confirmed what the Hyundai Santa Cruz pickup truck would look like when it arrives. The bare shell, presented in profile to the camera, showed off the creased body, though the lack of bumpers and mechanicals underneath leaves a bit to the imagination, though not a lot. Since the leak, artists have added a considerable dose of reality to their renderings, providing us our best look yet at the truck. The latest comes from our colleagues at Kolesa.ru, and they depict a stunningly chic pickup.

The sideways V-shaped crease that comes to a point and cuts through the bedside and into the taillights is present, along with the crease in the lower doors, both of which match the leaked photo. The rendering features the upward kick of the rear window and the chrome trim that wraps around the side glass. What the leaked photo lacked – the ends and oily parts – we’ve seen on test vehicles we’ve spied.

Those spy shots provide a decent, though concealed, look at the front fascia. The Santa Cruz will likely feature a split-lighting design that puts the daytime running lights at the leading edge of the hood and the headlights low in the bumper. We expect Hyundai’s corporate grille to span between the DRLs. It’s been harder to see the rear, which Hyundai has done a fantastic job of hiding from our photographers. We know it’ll have a short bed – can’t hide that under some cladding – and not much else. We haven’t seen the taillights, and only the leaked photo indicates how the C-pillar could appear.

Powertrains remain a mystery, though it’ll likely borrow from Hyundai’s stock – a 2.5-liter four-cylinder or a 3.8-liter V8. Maybe even a diesel. We expect Hyundai to pull the cover off its pickup sometime later this year – it’s supposed to enter production in early 2021. Maybe we’ll see it at the Los Angeles Auto Show, though we’d categorize most large-gathering events as “tentative” for right now.