The 2020 Chevy Corvette C8 and the 2020 Ford Mustang Shelby GT500 are two potent American sports cars. We’ll watch videos all day long of the two duking it out at the drag strip or on the race track. The latest drag race video comes from Hennessey Performance, the famous Texas tuning shop. While both of the cars in the video are stock – for now – the races between the two are a bit more exciting than you’d expect considering the massive horsepower gap between them.

The new 2020 Corvette packs a naturally aspirated 6.2-liter V8 capable of producing 495 horsepower (369 kilowatts) and 465 pound-feet (630 Newton-meters) of torque thanks to the extra oomph provided by the performance exhaust. The GT500 is a different beast with a supercharged 5.2-liter V8 producing 760 hp (567 kW) and 625 lb-ft (847 Nm) of torque. On paper, the GT500 has a clear advantage, but their packaging levels the playing field.

Check Out The Other Races: 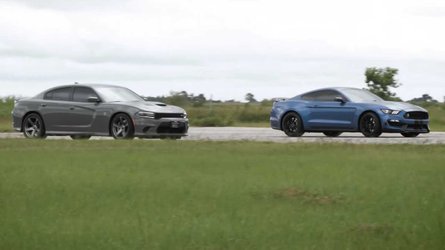 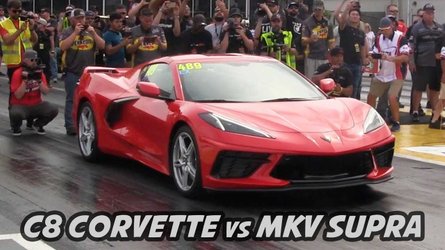 For 2020, Chevy flipped the script for the Corvette, moving the engine to behind the cabin. The Mustang keeps the big V8 up front, leaving the rear tires without much weight over them compared to the Corvette. The first race has the two starting from a dig, and the Corvette gets a sizeable lead off the starting line, likely due to its ability to better put the power to the ground. However, the Mustang closes the gap between them before the two speed past the finish line.

The second drag race had the two begin from a 40-mile-per-hour (64-kilometer-per-hour) rolling start. Here is where the Mustang shines, quickly pulling ahead of the less-powerful Corvette. At speed, the Mustang was better at putting all that power to the ground, instead of using it to find traction off the starting line.

While both cars are stock, there’s little doubt Hennessey engineers and designers are already toiling away at getting these two vehicles to produce even more power than they do now. It’s sort of their forte – like the twin-turbo C8 in development.