The track-focused model is the future range-topper of the already impressive AMG GT lineup.

After seeing it in lots of spy shots, a new rendering of the Mercedes-AMG GT Black Series from futurecarsnow shows how the new range-topping could look when the camouflage comes off. The actual debut should happen before the end of the year, according to a quote from Michael Knöller, AMG's global head of product management and sales, at the 2019 Los Angeles Auto Show.

The Mercedes-AMG GT Black Series boasts the most aggressive body of any road-going version of the vehicle yet. The front end gains a massive splitter beneath the similarly large grille. There are also big inlets in the corners. The hood gains a low-profile scoop in the center.

At the back, a gargantuan wing attaches to the rear deck. The diffuser has prominent strakes, and two exhaust outlets emerge from each corner.

Rumors suggest that the GT Black Series uses an upgraded version of the twin-turbocharged 4.0-liter V8 that could produce around 711 horsepower (530 kilowatts) and 590 pound-feet (800 Newton-meters) of torque. A dual-clutch gearbox would handle the power and send it to the rear wheels. The sprint to 62 miles per hour (100 kilometers) could be below 3 seconds.

Mercedes-AMG is reportedly trying to remove weight from the Black Series in comparison to other versions of the GT. Expect the cabin to be spartan. The track-focused design means that there are probably heavily bolstered seats for keeping the driver in place during hard cornering.

More To Know About The Mercedes-AMG GT Black Series: 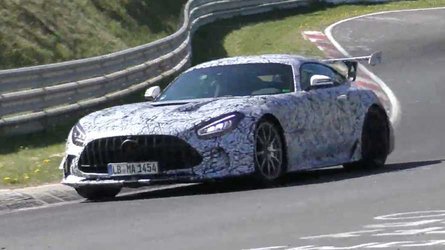 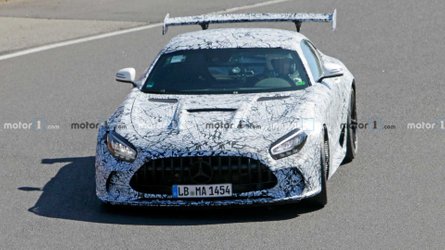 The existing GT R Pro retails for $200,645 after destination. By all indications, the Black Series would be even more expensive. At that price, don't expect too many of them on the road. The exact debut date for the model is still a mystery.