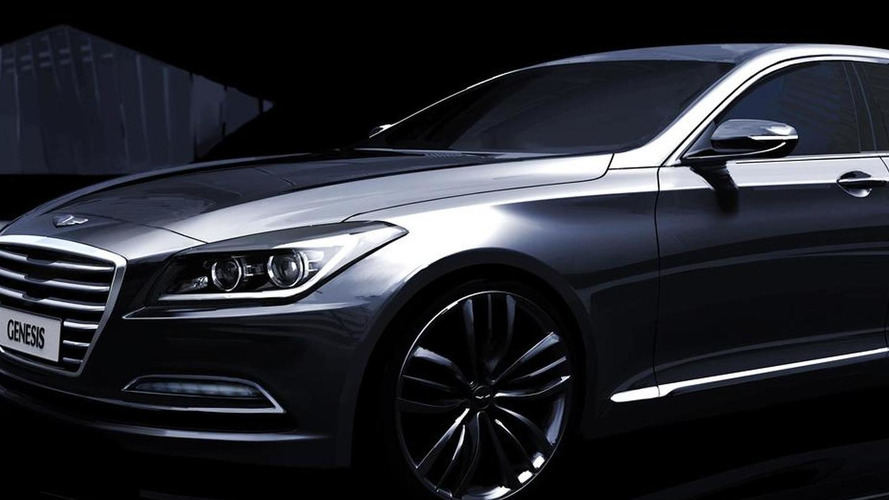 Hyundai has released two renders of the upcoming 2014 Genesis which we assume will be unveiled anytime soon.

Hyundai has released two renders of the upcoming 2014 Genesis which we assume will be unveiled anytime soon.

It will be the first model to adopt Hyundai's Fluidic Sculpture 2.0 design language which brings a singular hexagonal front grille and an overall more modern look. We already saw an undisguised car during an ad shoot so there aren't any surprises in terms of design which will take cues from the HCD-14 Genesis Concept but considerably toned down to be feasible for production.

Hyundai says the new Genesis sedan is a safer car thanks the improved body structure and rigidity which has provided good results in safety crash tests. Safety features on-board will include pre-safe belts and an emergency fastening device system. The first one will warn the passenger prior to tightening the seatbelt while the latter will automatically tighten the seatbelt in case of a crash.

The 2014 Genesis will be offered with the company's new all-wheel drive system called HTRAC which will electronically control torque split between the axles depending on road conditions. An improved stability in corners will be possible thanks to an electronic control suspension system called Advanced Traction Cornering Control, while high-speed stability has also increased as a result of implementing a Rack-mounted Motor Driven Electric Power Steering (R-MDPS).