Volkswagen slaps 110,000 EUR price tag on the XL1 in Germany 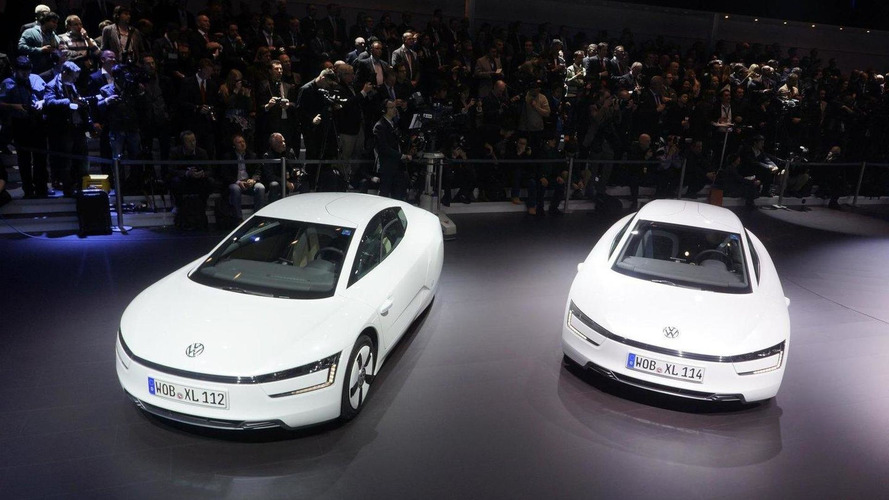 Volkswagen has announced the XL1 will carry a starting price of 110,000 EUR in Germany.

Volkswagen has announced the XL1 will carry a starting price of 110,000 EUR in Germany.

The XL1 can be described as one of VW's most interesting models in recent history thanks mostly to its extremely low fuel consumption figure of 0.9 liters / 100 km (261 mpg US or 313 mpg UK) with corresponding CO2 emissions of 20 g/km. The plug-in hybrid is equipped with a tiny two-cylinder TDI engine developing 48 HP (35 kW) which works together with a 27 HP (20 kW) electric motor and a 5.5 kWh lithium-ion battery.

Limited to only 200 units, the Volkswagen XL1 will be priced at 110,000 EUR in Germany while in UK it is expected to kick off at around 100,000 GBP. All cars will be hand built from carbon fiber reinforced plastic (CFRP) and will feature a left-hand drive configuration.

VW mentions the XL1 will complete the 0-62 mph (0-100 km/h) sprint in 12.7 seconds and will be able to reach a limited top speed of 100 mph (162 km/h) while an unrestricted car would theoretically do 130 mph (209 km/h) but the production vehicle will have the speed limiter activated in order to increase fuel efficiency. The XL1 will be able to provide an all-electric range of up to 31 miles (50 km).

As you would imagine, the technology implemented into the XL1 will be carried over onto regular models in the future once the tech will become cheaper and production feasible.

In related news, Volkswagen has confirmed development of a Ducati-powered XL Sport but they haven't said anything about a production model or at least a limited series. The concept will have a 1200cc Ducati engine outputting 190 HP (140 kW) and 91 lb-ft (123 Nm) of torque and will tip the scales at less than 1,752 lbs (795 kg).