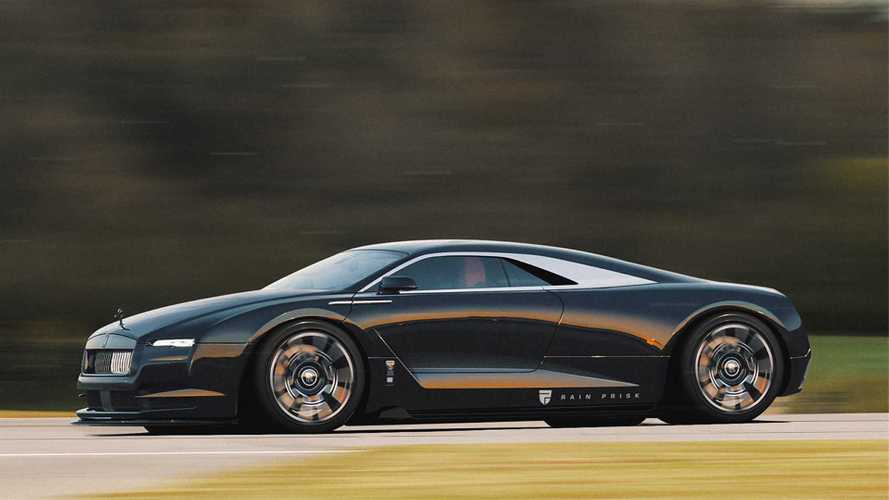 The Spirit of Ecstasy stays.

Rolls-Royce has carved out quite the niche for itself with a history of stellar luxury cars. Only recently did Rolls expand its lineup to include an SUV, the Cullinan, and who knows what else the company has planned. One type of car that doesn’t square with Roll’s bespoke lineup is a supercar. That’s not to say Rolls-Royces are slow – they’re not. The automaker has a different focus. But what if Rolls aimed Bugatti? What if Rolls made a luxury supercar?

A new rendering from Rain Prisk tries to explore that, creating a sleek Rolls supercar that looks like a forgotten vehicular cousin. Prisk details the challenges of taking the company’s design language and applying it to a sleek, two-door supercar, writing that there was trouble mixing Rolls’ classic design lines with a mid-engine layout. However, he was happy with the result, though he admits in the Facebook post that he struggled for a reason why the car should exist.

The result is a supercar that looks like it’s been stretched over the wheels. The mid-engine layout messes with the iconic look of the company’s products – a long, upright front end and short rear deck. The front clip lacks the typical Rolls presence with something sleek and sporty. There’s a narrow grille, thin headlights, and the Spirit of Ecstasy right where she should be – on the hood (or front trunk?). Moving down the side, we can see the strangely shaped doors and angular fender before blending into a long rear that makes room for the V12.

There’s no indication Rolls is planning to introduce a new supercar to its lineup. Rolls teased its future with the 103EX concept from 2016. It was a long, sleek luxury car that packed both batteries and autonomous technology. It looks like a Rolls with a super long hood, upright grille, and short rear deck. It wasn’t a mid-engine supercar.