What Is This New Porsche 911 Convertible Doing Off-Road?

There are many different types of auto enthusiasts in the world, but when you really get down to the nitty-gritty, everyone fits into two categories. You have those who fuss incessantly over how the car looks, and then there are the folks who will drive anywhere. Yes, the two groups can blend together but ultimately, one of these characteristics will outshine the other. You can probably guess which group this particular Porsche 911 owner falls into.

Full disclosure: we have absolutely no context for this video. It came to our attention through Dizzyriders.bg, which found it on a Facebook page from one Deyan Vasilev. This bit of off-road tomfoolery apparently took place near Sofia, Bulgaria, and well, the video pretty much says it all.

That’s a new 992-series Porsche 911 Carrera 4S Cabriolet tacking this decidedly rocky trail. While we’re certainly no stranger to off-roading Porsches, they typically have some measure of modification to make them a bit more rally-ready. This new 911 has no such upgrades – the car sits very low to the ground and those rubber-band-spec street tires look ready to burst upon reaching the first moderately sharp rock on this trail.

These Porsches Are Better Suited For Such Things: 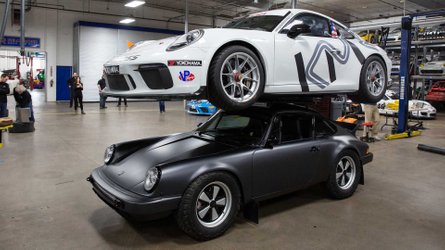 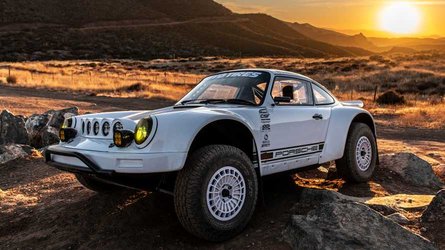 And make no mistake, there are plenty of rocks on this trail, and it looks a bit steep to boot. Try not to cringe when you see the 911’s rear fascia scraping across the ground as it slides down the rocky path, and if that’s not enough, there’s a bit of water at the base of the hill to clear as well.

Still, we give the driver – and the all-wheel-drive Carrera 4S – some credit. We don’t have the slightest clue why this street-prepped Porsche is taking on a rocky road, but the car seems to escape more or less unscathed. Of course, we have no idea what the underside looks like, but for owners who fall into the drive-over-shine category, such things are utterly meaningless.