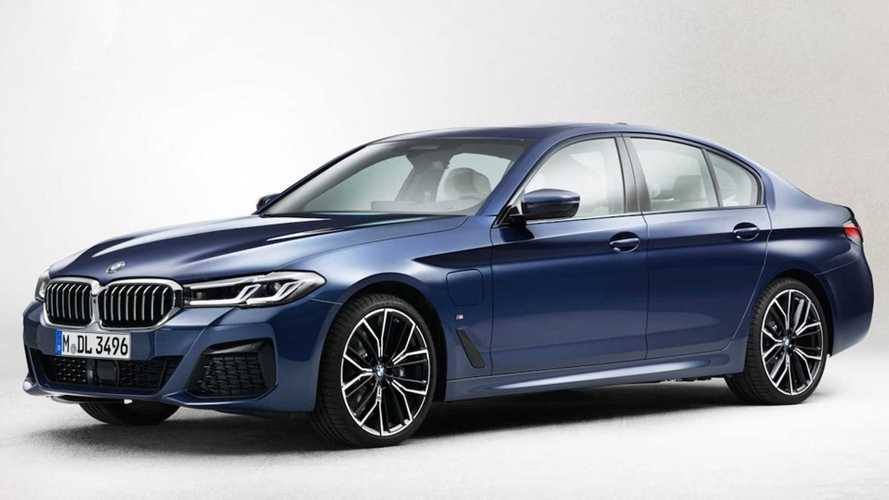 The front end has sharper elements for the headlights, grille, and portions of the front fascia.

Newly leaked photos appear to be official shots of the refreshed BMW 5 Series from the front and rear, as posted by Bimmer Today. The badge on the back says this is the 530e, and there's a charging port for plugging in the sedan on the front fender. It also wears the aggressive aesthetic touches from the M Sport package.

Unlike the recent 7 Series' refresh, the designers don't use this opportunity to make the grille larger. The 5 Series looks sharper at the front, including having more angular edges for the headlights and around kidneys. The revised lower fascia looks a little blockier, too.

The changes to the back are minor. The taillights seem to have a sharper outline, and there are small tweaks to the bumper's sculpting.

The 5 Series' powertrain range will reportedly expand to include a 545e plug-in hybrid version. Assuming it's like the 745e, then the model would combine a 3.0-liter turbocharged inline-six and electric motor with a total of 388 horsepower (289 kilowatts).

Save Thousands On A New BMW 5 Series

Spy shots also point to the existence of the M5 CS. It would be a version of the sedan with even higher performance, including the possibility of more power. Photos show it wearing bronze-colored wheels.

We have been seeing spy shots of the revised 5 Series since July 2019. With this new leak in mind, a full debut of the updated model could be very soon. Expect the unveiling to happen online because the coronavirus outbreak means that there isn't a major, international auto show anytime soon.