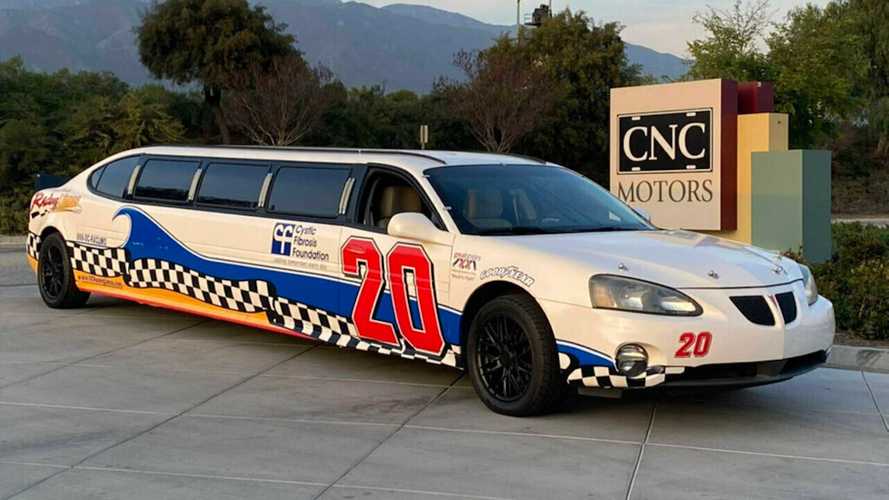 Care for a race party, anyone?

Limos or limousines are great, especially if you care about interior space and luxurious amenities, which should bring a feeling of accomplishment to the owner.

There are many types of limos. There are the stately ones, which you'd see being used by government officials and high-ranking officials, while there are those that offer a bit more capability such as SUV and off-roading limos.

And then there are Racing Limos, a Florida-founded specialty transportation company that specializes in race-themed stretched cars such as this one: a 2014 Pontiac Grand Prix NASCAR-themed limo.

This white sample of a racing limo isn't built for racing, though, as the name suggests. Rather, its design is themed to celebrate racing, in this case, NASCAR. While Pontiac isn't necessarily a brand to represent NASCAR – since it pulled out from the racing series in 2003 – this limo still aims to celebrate that with vinyl decals and NASCAR-styled spoiler at the back.

The exterior of this 16-year-old Pontiac Grand Prix converted limo is definitely not for everyone, but the interior looks great and luxurious, as you would expect from this class. It has a minibar, black vinyl upholstery, and a large mirror on the ceiling.

These Long Vehicles Aren't Too Much Of A Stretch:

Stretched Cadillac Escalade Is An Opulent Limo SUV You Can Own

Quite hefty, you might say, but considering its relatively low mileage of 22,546 miles, you might consider this a steal with used limos within this mileage and location are priced almost as double. You always have the option to remove the things you hate that come with it.