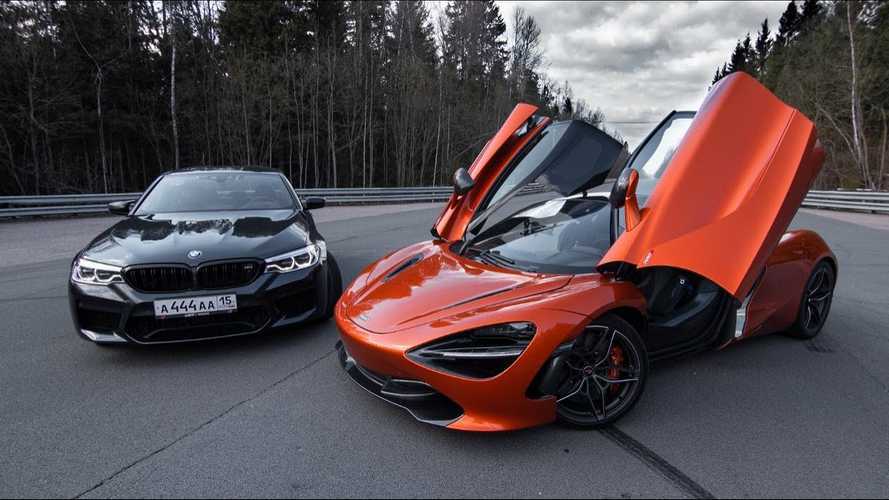 It's a battle of two very different vehicles.

The McLaren 720S is one of the undisputed modern drag kings. Even in bone stock form, it’s capable of covering the ¼-mile distance in less than 10 seconds, which is pretty impressive. On the other hand, the BMW M5 performance sedan plays in a league of its own with a ¼-mile time of approximately 10.9 seconds.

Of course, that last number is true when the Bavarian family rocket is in factory condition with no performance modifications. We’ve seen how capable the 4.4-liter twin-turbo V8 under the hood is with some software and hardware tweaks, which brings us to today’s drag race.

As you’ve probably guessed already, the video at the top of this page, coming from the Russian YouTube page DSC OFF, pits against each other a stock McLaren 720S and a tuned BMW M5. Unfortunately, the description of the clip doesn’t provide more information about the M5's modifications and only says the car now has approximately 840 horsepower.

This puts the sedan in a very comfortable position against its British opponent. As a friendly reminder, the 720S comes from Woking with a 4.0-liter twin-turbo V8, which pushes out 710 hp and a seven-speed automatic gearbox routes them to the rear wheels. This particular car is a coupe, which means it weighs 3,167 pounds (1,437 kilograms), while the M5 is significantly heavier at 4,370 lbs (1,982 kg).

So, with all the numbers on the table, which car do you think will win this unusual drag race?