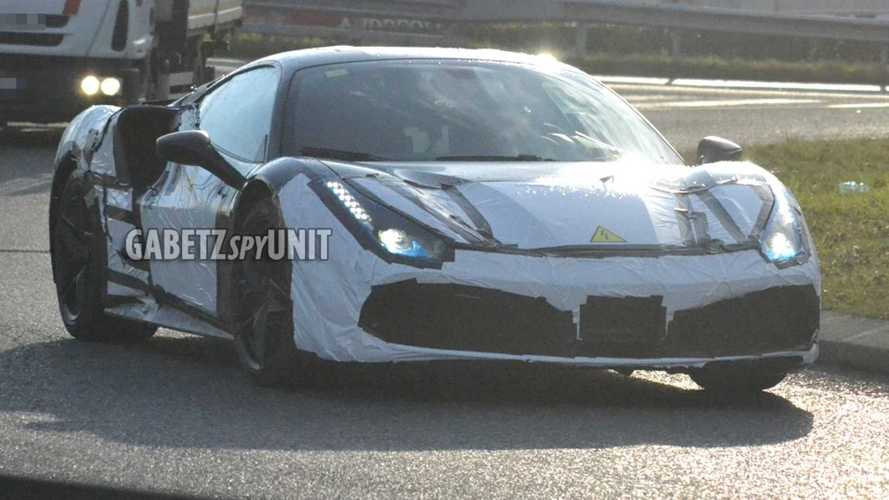 'Mule' is the keyword as there could be an entirely different car hiding underneath the familiar body.

It was back in September 2018 when Ferrari announced an ambitious 2018-2022 product roadmap with 15 new products in the pipeline. Five of them were launched last year with the unveiling of the F8 Tributo, F8 Spider, 812 GTS, SF90 Stradale, and the Roma, with two additional new models slated to debut in the second half of 2020 and the Purosangue SUV in 2021.

Aside from the busy product rollout – which also includes limited editions such as the Monza SP1 and SP2 speedsters for the “Icona” series – the aforementioned roadmap also talked about how the Prancing Horse will embrace electrification and introduce a V6 family of engines. It is believed one of the new models Ferrari is working on will take the shape of a hybrid sports car with a six-cylinder engine.

Could this be it? There’s no way of knowing for sure, but one could speculate this 488 test mule is actually hiding a completely different car packing hybrid power. Spotted by Walter Vayr in Maranello near Ferrari’s factory, the vehicle had a license plate denoting it was a prototype, along with high-voltage yellow stickers revealing its electrified nature.

It’s not a carbon copy of the 488 GTB or the hardcore Pista because the dual exhaust tips are positioned higher at the back in the same vein as they are on the SF90 Stradale, although not as close to one another. There seem to be some blue wires coming out of the engine compartment and going inside the cabin where they’re probably hooked up to measuring devices. From some angles, we can see the dashboard has a red emergency button on the center console for when something goes horribly wrong – a feature we’ve noticed on many test vehicles.

There’s another test mule featured in the adjacent image, carrying the same weird camouflage but riding on different alloy wheels. The yellow sticker on the driver’s door also suggests the car had an electrified powertrain. Both of them appear to be missing the trim pieces flanking the rear glass, which isn’t all that unusual for a work-in-progress car, especially a test mule.

While reports insist a Dino revival is in the works to serve as the brand’s entry-level model, Ferrari Chief Commercial Officer Enrico Galliera refuted those rumors last year in an interview with Autocar. Those reports said something about the twin-turbo 2.9-liter V6 from the Alfa Romeo Giulia Quadrifoglio being teamed up with an electric motor for a higher combined output.

That said, a V6 is in the works and it would make perfect sense to slot at the bottom of the Ferrari range underneath the V8 and V12 models. It also seems logical to get an electric boost considering the roadmap promised an estimated 60-percent hybrid mix by 2022. However, the “Dino” moniker is not coming back anytime soon.