These Suzuki Jimny Decal Sets Cash In On 1980s Nostalgia 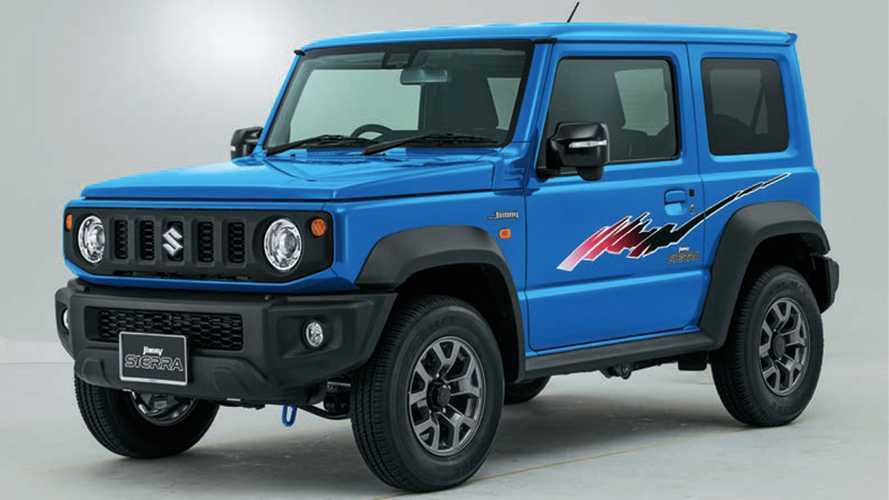 Want to make your already-retro ‘Zook a little more twee? The accessories catalog has some options.

People who buy the new Suzuki Jimny do so for a variety of reasons – nimble proportions, decent economy, real-4x4 ability, and a low price. And of course, there’s it’s undeniably cute G-Class–mini styling, which cashes in on a decades-old reputation for rugged and reliable performance. For an even closer link between the 2020s and the 1980s, Suzuki Japan now offers a retro-inspired lineup of decals for the teensy SUV.

Suzuki Jimny Owner's Pros and Cons After Year Of Overlanding

“Offroad Style” comes with three-tone black/grey/red stripes for the top and clamshell of the hood, as well as rocker panels and beltline under the rear window. Slightly nonsensical “REAL OFFROAD” script adds to the charm. “Heritage Style” looks a bit more techno-centric and digital, thanks to sharp-edged silver, grey, and orange accents for the beltline.

The ultimate retro design is called “Revival Style,” boasting the same squiggle graphic as was seen on countless Suzuki Samurais and Sidekicks in the late 1980s and early 1990s. The Revival looks as though it could have been an extra on Baywatch, serving as Shauni McClain’s personal vehicle or something. The Revival’s white-pink-black gradient is seemingly ripped straight from paper cups and Lisa Frank folders, and it’s a good look for the boxy Jimny.

The accessory catalog also includes “Survival Style” decals, which look tailor-made for Spice Girls and NSYNC devotees thanks to their hybrid camouflage / animal print design. Let’s face it, nostalgia for the 1990s is back too, and the Suzuki Jimny is primed to capitalize on Generation X and Millennial sentimentality.

The decal sets are available for both the Jimny kei car and the Jimny Sierra compact SUV. Japan offers two versions of the off-roader, with the kei making use of a narrower body and 0.6-liter turbocharged three-cylinder engine. Meanwhile, the Jimny Sierra’s fender flares and wider track disqualify it from the low-tax kei class, with consolation given via a much more powerful 1.5-liter inline-four. Overseas markets like the United Kingdom and Australia get wider vehicle only, where it’s simply called “Jimny.” It’s not clear whether these retro graphics will be offered anywhere but Japan.