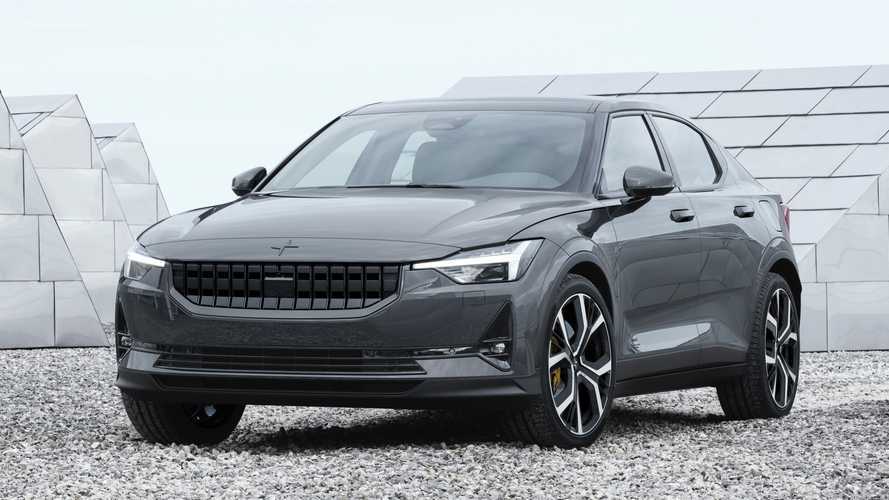 A few options include the Performance Pack, Nappa leather, and 20-inch alloy wheels.

Following the launch of the Polestar 1 hybrid coupe last year (which we've driven, and loved), the company today announced pricing for its first fully electric vehicle, the Polestar 2 sedan. When the 2 arrives in the U.S. this year, customers will have to shell out $59,900 for the electric four-door to start. And that's before options.

The priciest option for the Polestar 2 is the $5,000 Performance Pack, which adds Ohlins dampers, Brembo brakes, and trim-specific 20-inch alloys, as well as drops the overall ride height by 0.2 inches (5.9 inches to 5.7 inches). If you want 20-inch wheels without the Performance Pack, it’s $1,200. And if you choose Nappa leather over the standard "Wave Tech" seating, it’s another $4,000. Buyers can also select from six metallic paint colors, at $1,200 each: Snow, Magnesium, Thunder, Moon, Midnight, and Void.

Assuming you select every one of those options listed, you could be looking at a price tag of nearly $70,000 for a fully loaded Polestar 2. The good news is, with current tax incentives and some states offering rebates as rich as $2,000 – like in New York and California – select customers could see discounts of up to $9,500 toward the purchase of a Polestar 2.

Granted, the Polestar 2 is still a bit pricier than some of its more-mainstream competitors. The Tesla Model 3 starts at $39,900, for example, and the upcoming Ford Mustang Mach-E costs $44,995. But the sedan does undercut some pricier electric crossovers, like the Audi E-Tron, Jaguar I-Pace, and Mercedes-Benz EQC. Buyers will have to decide if this premium electric sedan is worth the cost.

Whatever the case, the Polestar 2 has an impressive stat line. Its 78-kilowatt-hour battery pack produces 408 horsepower (304 kilowatts) and 487 pound-feet (660 newton-meters) of torque, able to propel the sedan to 60 miles per hour (96 kilometers per hour) in 4.7 seconds. The Polestar 2’s EPA-estimated range is about 275 miles (442 kilometers), and the sedan even lauds a best-in-class towing figure of 3,300 pounds (1,497 kilograms).

In the cabin, the Polestar 2 gets an industry-first Android infotainment system atop an 11.0-inch touchscreen. The setup includes features like Google Assistant, Google Maps with EV charging support, and even access to the Google Play Store, with the ability to download a few specific apps.

The Polestar 2 kicked off production in March, and the first U.S. buyers will get their hands on the sedan beginning this summer. The company also promises the opening of a few "Polestar Places" – essentially dealership equivalents – on the West Coast and in New York later in the year.

The Polestar 2 Tows More Than Any Other Compact EV

Polestar announces the formal pricing of the Swedish brand’s first pure electric car, the 2021 Polestar 2. The electric performance fastback has an MSRP of $59,900 in the United States. The MSRP of the Polestar 2 is below state incentive thresholds in critical markets such as California and New York. Additionally, this price enables state rebates of approximately $2,000 in certain states*, for total tax incentives of up to $9,500 when combined with the federal electric vehicle tax credit.**

“We are quite enthusiastic to announce the U.S. pricing for the Polestar 2,” said Gregor Hembrough, Head of Polestar USA. “The MSRP is lower than we originally targeted, and will be extended to all of our current reservation holders. “With an online purchase option, lower pricing, considerable tax incentives, and production already underway, the Polestar 2 is well positioned for a successful entry into the U.S. market.”

Polestar also announces option pricing for the Polestar 2 as follows:

The Polestar 2 arrives with 408 hp, 487 lb.-ft. of torque, all-wheel drive and a 78 kWh battery pack, which enables considerable EV range. It is also the first car in the world to feature a built-in infotainment system powered by Android, featuring voice command via the Google Assistant, Google Maps with EV charging support and app downloads via the Google Play Store.

The Polestar 2, which began production in late March, will begin delivery to U.S. reservation holders in summer 2020. With a digital retail model, the Polestar 2 is available to purchase on Polestar.com. To supplement this, the brand will soon open physical retail showrooms—Polestar Spaces—where non-commissioned Polestar Specialists will be able to assist customers with product information and test drives. The first of these locations will open on the West Coast of the United States and New York in late summer 2020, with additional locations to follow.

The Polestar 2 is available for sale in all 50 states and Polestar will announce lease and retail finance options for the vehicle in the near future.